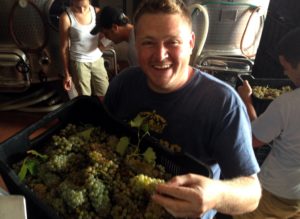 So established is the Alheit name in the elite of modern South African wine that it’s jolting to realise that the inaugural vintage of Chris and Suzaan’s first wine, Cartology, was 2011. It’s a convincing reminder to me of just how fast has been the pace, and how extraordinary the progress of South African wine, that when I look up Alheit in my book on South African wine (published in 2013), there’s scarcely anything: a reference to this exciting new winery’s commitment to old vines, and a quotation from Chris about his “dead certain[ty] that the golden age of Cape wine is ahead of us”. If we’ve arrived in that golden age, the Alheit glitter and gleam is a marker of it.

My burst of enthusiasm is because this week I’ve tasted not only the second vintage of Cartology, but also the maiden vintages of the first two Alheit old-vine, single vineyard wines: Radio Lazarus 2012 and Magnetic North Mountain Makstok 2013. Incidentally, all three wines in their first vintages scored five stars in successive issues of the Platter guide (if not consistently since then), which says something about the guide’s openness to newcomers.

One can’t drink Radio Lazarus now without a poignant sense of loss, knowing that this year no wine could be made from the Bottelary vineyard (and just a little from the nearby vineyard which started contributing to the label a few years back), nor will it be made again – certainly not from those old Bottelary Hills vines, which the current drought finally pushed beyond resurrection (see my account of this here).

And what a loss to South African wine that is! This became even clearer to me this week, when I broached my case of Radio Lazarus 2012, and shared a bottle of it over dinner with Michael Fridjhon. We had no trouble agreeing that it was drinking superbly – and it inevitably prompted some discussion of wine prices and wine values, with Lazarus coming out if it all well (though it’s an expensive wine by local standards: over R600). How well the wine will develop further, I don’t know – I’d guess for at least five years, and will not be in a hurry to drink my other bottles – but it is in a superbly harmonious state, vibrant and intense, with a remarkable acidity that is perfectly integrated; altogether substantial but not weighty. It seems to me that it would be particularly silly to compare this with Loire chenins simply on the basis of a common variety: the variety at this stage is comparatively unimportant, and the Alheit wines are more about origin; structurally, a more useful comparison could be with fine white burgundy – and, frankly, there aren’t all that many of those that could best this wine.

A few nights earlier I’d drunk the Cartology 2012, which is also an excellent wine that has developed well, even if it’s a touch less thrillingly poised, less expressively specific, than Radio Lazarus. But thrilling and expressively specific would be words I’d want to use again for Magnetic North Mountain Makstok 2013, from high-lying, ungrafted chenin vines in the area colloquially known as Skurfberg. I can still remember – the wine reminds me – how the hairs on my arm stood up when I first tried it four years ago, so electrifying, so different. It has a tantalising earthiness, along with subtle fruit and hot-dry-hillside notes, but seems much less ready for drinking than the year-older Lazarus, (with which it shares that unponderous, lifted intensity), because there is clearly still some development and harmonious integration of its balanced components to go; but, testifying to the wine’s future, the flavours linger forever.

If the Alheit project hadn’t existed it would have been necessary to invent it. Of course, ten years ago it didn’t exist; and the Cape landscape and old Cape vines and modern Cape wine culture did invent it. Fortunately, there was a winemaker with a rare magical touch to bring it into being. And, like the early wines in bottle, the project is developing splendidly.