A few weeks back, viticulturist Jaco Engelbrecht tweeted a picture of a piece of land roughly churned by tractor marks and empty of living plants, with the comment “Another 3.5 hectares of beautiful Viognier lost due to low yields and low prices.” I confess that my immediate thought was: well, it could have been worse – it could have been chenin, or semillon, or chardonnay … or just about anything.

It would be true to say that I have mixed feelings about viognier. When I browse through what I’ve written about viognier wines over the past decade, I find the occasional glowing notes, but more doubtful ones. The problems I have with it were no doubt worse a decade ago, when most makers of viognier were stressing its voluminous, voluptuous potential – wines brimming over with heady perfume, often blowsily opulent, with oak and alcoholic power, and a bit of sweetness too. Unfortunately, the grape has relatively little flavour until it gets fully ripe – and then it easily has rather too much.

Things have generally become a bit more restrained, I suspect, but even now, as Christian Eedes suggested when reviewing Lismore’s hopefully-named but “lavish” Age of Grace Viognier 2017, “not many people choose to drink Viognier for its understatement” (see here).

How many people choose to drink it at all these days? Quite a lot, it seems (if not enough to prevent the pulling out of 15-year old vines). It quickly grew fairly popular after the first Cape viognier was made two decades back – Fairview 1998 was the pioneer – as part of a growing international interest in a grape which had hitherto been mostly confined to its home in Condrieu in the Northern Rhône valley. It seemed rather exotic – and probably still does for many winelovers encountering it for the first time. There are now (end of 2016 – the latest figures available) over 800 hectares of the stuff, mostly in warmer areas.

Platter’s 2018 lists about 100 examples of mono-varietal viogniers. For a while, it was also fashionable here and in Australia to add a dash (sometimes too much) to Syrah, following the probably exaggerated tradition of Côte-Rôtie, but I think that practice has declined. There are also many white blends – of the Swartland style – which include viognier, some of them undoubtedly excellent. Many of the grander ones, however, have much less of it these days than they used to. That’s partly, I suspect because of superior, more harmonious blending partners becoming more available (marsanne and roussanne, for example); partly because there’s less interest in having the rather unsubtle aromatic contribution brought by viognier (Eben Sadie used to say that he needed to hit viognier on the head with oxidation before he could use it); partly because viognier doesn’t have a good track record for ageability.j The more subtle, refined, steely examples of local viognier would include those of The Foundry, Tamboerskloof and Eagles’ Nest. No doubt there are others that I don’t know. 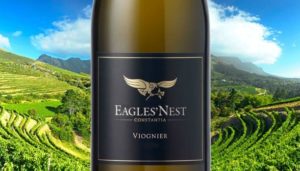 In fact, Jaco’s tweet and my involuntary guilty response reminded me of the last viognier I’d bought (a rare purchase), and that somewhere I had three bottles of Eagles’ Nest 2015, which I’d intended drinking at about two years of age. I’d been hugely enthusiastic about it on release. “It’s always been a good wine,” I wrote then, “but this was special.” I used phrases like “unusually restrained nose”, “very distinguished, elegant”; “great presence, intensity, subtle richness”. It cost R155 on release; I see the 2016 at Cybercellar for R199.

So I broached a bottle last week with some pleasant anticipatory tinglings. And very good the wine was at three years old, flavourful and balanced with a good acidity. Certainly still all there, if not as youthful and fresh as it had been, and my pleasure was less enthusiastic than it had been. I reckon I should have drunk it earlier, when it had that thrilling quality. But this reluctance of the wines to develop commensurately to their youthful promise is partly what stops viognier, even as it approaches its best, from being a great variety.

Nonetheless, my sympathies go to Jaco Engelbrecht for his loss.