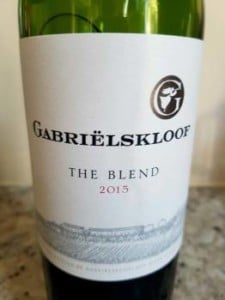 The 2013 vintage of The Blend from Bot River property Gabriëlskloof won the trophy for the best in class at this year’s Old Mutual Trophy Wine Show before winning double gold at the Six Nations Wine Challenge and the recently released 2015 again impresses.

From 49% Cabernet Sauvignon, 30% Cabernet Franc, 14% Petit Verdot and 7% Malbec, it was matured in a combination of barrel and tank. On the nose, red and black fruit, violets, some attractive herbaceous character and pencil shavings while the palate is fruit forward but not unduly sweet, the acidity nicely fresh, the tannins fine and gently grippy. Immensely likeable and a bargain at R85 a bottle.

The Landscape Series from Gabriëlskloof in Bot River showcases the property’s top vineyard sites along with some of South Africa’s best old vines. It’s an ambitious undertaking and I would...

The Projects Range from Gabriëlskloof in Bot River allows the winemaking team space to experiment with alternative fermentation and ageing methods. Tasting notes and ratings for the new releases as...