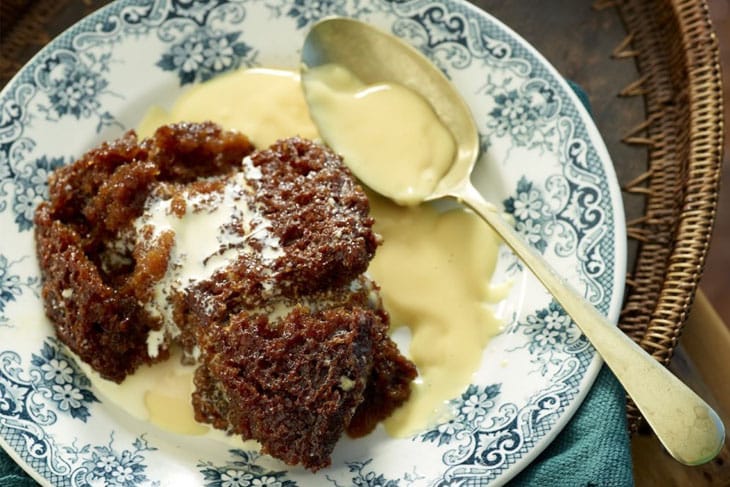 A while ago my chef friend asked me for the gold standard malva pudding recipe. I had a handwritten copy of the one from Magdaleen van Wyk and Pat Barton’s 1993 cookbook Kos Wat Ons Ken, so I gave her that.

It’s not the first time I’ve been asked for the best recipe for this Cape classic: a baked, sauce-smothered sponge that smells like roasted honey and has tinned apricot jam, cheap vinegar and bicarb as its secret ingredients.

My teenage daughter quite frequently wants to know why we don’t have malva pudding in the house. “I want something hot and sweet, and I want it now,” she says from the couch. “Why don’t we ever make malva pudding? Why?”

So I decided to make several malva puddings, using recipes that popped up after a Google search. I thought we all deserved to know which was, in fact, the gold standard. The uncontroversial result: SA’s best malva pudding recipe is old and oft-celebrated and comes from Boschendal wine farm.

Forget Maggie Pepler’s humble ingredients – and the fact that this recipe needs nothing more in the way of equipment than a bowl and a wooden spoon – this is a genius pudding, worthy of craving and whining. Her perfect Malva has at least three textures: it’s caramel-crunchy at the edges, melt-in-the-mouth smooshy in the middle, and super-moist spongey in between. The three textures are the result of a long bake, followed by drenching in a warm, buttery-sweet sauce from the stove. It’s best served warm, with custard or thin cream.

One of the recipes I tried produced a delicious pudding, but it was thin and wet throughout – not just like a soaked sponge; rather like a soaked bath sponge. Another used a quarter of a cup of balsamic vinegar – instead of Pepler’s tablespoon of white wine vinegar. I was excited when I found a recipe for “Steven Biko Malva Pudding”. Sadly it was just Pepler’s recipe, renamed.

Malva pudding is ubiquitous these days. Many restaurants offer it – especially those aiming to impress foreign guests – and it’s a supermarket ready-meal standard. The Woolworths version is good. Pick n Pay does one. So does Checkers. Last week I bought an Ina Paarman malva pudding baking kit.

When Barack Obama visited South Africa, malva pudding rounded off a state banquet. Oprah Winfrey’s chef makes a version of it. It’s such a staple of boerekos – right up there with boerewors and milk tart – you’d think it had been around since the 1700s. It may well have been, but food writers like Nikki Werner and Errieda du Toit, who have searched for decades-old recipes (and even the origin of the name), have been thwarted.

What is agreed is that Pepler joined the Boschendal Restaurant in 1977. She brought her malva pudding recipe with her and served it as part of the wine farm’s famous lunch buffet. From that day forward, Pepler’s malva pudding occupied pride-of-place among the desserts every day for 34 years.

We know this thanks to Michael Olivier, a wine and food commentator who has written for Winemag. In the 1970s, Olivier was the PR manager for Boschendal. It was he who asked Pepler to cook in the kitchen while the head chef was away.

Olivier tells us that Henry Kissinger loved the malva pudding and ginger snaps when he visited. The daughters of Lord Mountbatten, the Countess of Burma and Lady Pamela Hicks, were guests. French designer Pierre Cardin and celebrities from the film and music worlds were welcomed at the buffet table.

It’s hard to imagine there was ever a time when Cape wine farms didn’t have parking lots and delis, cafes, restaurants and chefs. But so it was. In the late 1970s and early 1980s almost no wine farms offered eating experiences. If you were lucky you could visit for wine tastings from little branded glasses (they came with tasting tickets inside and you kept them afterwards) – and crushingly boring, barrel-scented cellar tours (trust me, the only thing the cellar tours had to recommend them was cool respite from the heat outside. Then again, in those years, as a primary school child, I may not have been the ideal audience.) Boschendal only offered one meal – the roast – and there was no menu. However, given that big, lazy eating and big, old wine farms are a match made in heaven, the Boschendal carvery proved very popular.

Olivier tells a great story of the Cape’s recent history, and home cooks owe him thanks for sharing a brilliant recipe. Pepler’s malva pudding smells like the inside of dark Cape Dutch kitchens, coals, enamel baking trays and sweet wine. It’s a smell that seems to encompass hundreds of years of salty storms and sun on fruit. It’s a layered and balanced whiff of Cape history. From a flavour balance point of view, there’s something about the vinegar and the apricot jam that makes malva pudding keenly desirable, much more desirable than its close cousin sticky toffee pudding, say – a childishly sweet confection by comparison – or tipsy tart – I don’t love the texture of those dates – or Cape Brandy Pudding – unnecessarily heady, with the fumes of liquor challenging the natural perfume of the cake.

Whether or not Pepler’s pudding is as old as the Cape, it tastes like it is. Put another way, it’s a recipe that would – and by all appearances, will – stand the test of time.

Pepler died in September 2013 at the age of 87. Just weeks after her death Olivier wrote: “ … she was such a humble lady, I don’t think (she) was ever aware of the fame she created for this iconic South African dessert”.

Cook’s note: I followed Pepler’s recipe to the letter, except that I left the sponge in the oven longer than specified after removing the foil. I wanted what Werner calls “brulee edges” — and a sponge that could withstand a thorough soaking. I also reheated the pudding in the oven later. It didn’t mind a bit. The next day we microwaved the leftovers. This was no problem either.

Only the sweetest of wines won’t taste thin and sour in the presence of this dessert, and once again Muscadel comes to the rescue.