Johannesburg is packed full of people who have come from somewhere else in search of something better. Whether that somewhere else was pogrom-ridden Eastern Europe or Interahamwe infiltrated Central Africa, Egoli’s overarching ethos has always been to move forward and don’t look back. Which is why much of the city’s earlier architecture has been lost amidst the constant cycles of destruction and reconstruction.

The Rosebank Firestation – yes, that’s “firestation” as one word – is a relatively rare example of Johannesburg building heritage retained. Well, sort of. It is not so much restoration as reconfiguration. The 1930s fire station forms a core (and fire fighters still work out of the central portion of the building) but light, bright, cascading open workspaces (occupied by ad agencies and hipster techy-types) have been built around and above the original Art Deco. The design cleverly celebrates and emphasizes past beauty rather than imitating or undermining it. Intertwined areas offer insight into the ways in which the lives of those using the building have changed and stayed the same. As such the space offers an intriguing narrative of Johannesburg’s history. 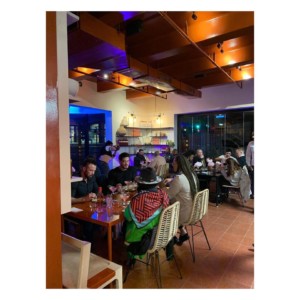 These two worlds merge and mingle at Brik. The tables at the front of the eatery are located in a renovated bay window-lit nook within the original heritage building. The back tables of the same restaurant spill out into the triple volume vertical expansiveness of the newer space and then flow on into a foyer. Here guests are greeted by a 3-meter Hannelie Coetzee sculpture which uses pixel-like blocks of reclaimed wood from the demolished Rissik Street Post Office. Initially the shape seems abstract but the ‘pixels’ come into clear focus to form a woman when viewed from a distance – it is surely no accident that the vantage point of Brik’s mid-section tables works particularly well.

The overlapping, multi-use vibe flows from the architecture into the eatery’s ambiance. During the day Brik is a networking hot spot serving stylish salads and craft beer. At night the feel is romantic restaurant.

Whatever the time of day, Chef Sasha Simpson’s philosophy is consistently eco-epicurean. Impressive due diligence has been done to ensure that everything on the menu is environmentally sustainable, healthy and fair. Vegan, vegetarian, gluten-free, organic, nose-to-tail meat eaters, green listed fish fans, locavores, Fair Trade enthusiasts and ancient grain eaters are all amply catered for.

There is relatively little waste – due to the re-use and re-purpose cooking style in the kitchen but I am reliably informed at any waste made during the making of meals is separated (plastic/ glass/ paper/ organic waste) into biodegradable dustbin bags. Organic stuff is sent to a farm north of Pretoria upon which they grow produce, the plastic water bottles go back to the bottle company who process them into t-shirts and tote bags (both available on the retail shelf) and the soft plastic is used in monthly eco brick making events for school groups. All this and the food still tastes great.

To start I had ricotta and spinach gnudi (R52). Gnudi are what gnocchi become when they are made with cheese rather than potato. The plump, light cheese spheres were served with a pool of coriander and pumpkin seed green mole sauce and a burnt butter, sage drizzle. My friend chose the dhal bowl (R62) with grilled tofu, pickled cabbage and toasted seeds. Of all the food I tried the latter was the least successful – perfectly pleasant but subtle to the edge of bland.  My main was succulent, slow cooked short rib (R70) which had a dark intense, meaty jus and did all the right sticky-sweet-sour stuff. Meat slipped from bones and was scooped up with buttery mealie meal. I was so engrossed in my carnivory that I forgot to try my partner’s vegan fried ‘fish’ (actually banana blossom) with sweet potato chips and aquafaba tartar (R50). 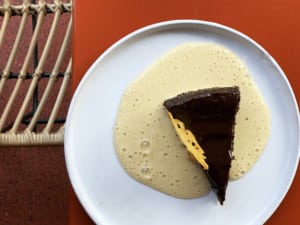 Puddings were seriously special. I had a superb vegan and gluten-free sorghum and amaranth chocolate cake with a banana beer sauce (R65). The cake’s crust was light yet crisp, the centre had the gorgeously gooey texture of a perfect brownie. Intense chocolate flavour was everywhere apparent. The fermented, malty fruit beer sauce added an umami element that saved me from drowning in the dense sweetness of the cake. My friend had a smooth, creamy sweet yet sour, uplifting rather than heavy cheese cake with a whisky custard (R30).

We drank pineapple and cardamom kombucha with our starters and moved on to wine with mains. The wine list is made up of small, independent producers many of whom have a niche and/or idiosyncratic approach to their craft. To my eye there were no obvious, same old, same-old, safe choice options available. Many of the bottles on offer were unfamiliar to me and I would have liked longer descriptions on the wine list or a skilled sommelier. In the absence of such support, I resorted to Googling the offerings so as to get a sense of what might work well with my food.

Whether you celebrate with Gabrielskloof Madame Lucy MCC (R415), sample Boschkloof Kottabos Chenin Blanc (R368) or sip on Bizoe Idioglossia Malbec (R719) mark ups are at the reasonable end of average and there is something to intrigue and educate everyone. We ultimately chose the Usana Cabernet Sauvignon (R295) to drink with our mains. Usana is isiXhosa for baby/ newborn which felt right. Almost all of the winemakers listed were drawing on personal experiences of reinvention and new beginnings. Something and someone new was being born. There were varietals that had fallen out of favour and several producers who had lived other professional lives before becoming winemakers. Which is just as it should be in order to match the mood of the place and the content of the plates.