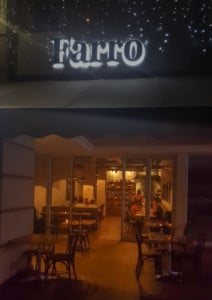 Farro is a small and stylish space with Bentwood chairs and appealingly unfussy candlelit tables. It opened over a year ago and every bloggy-hipster type in town has long since sung its praises. I have been hesitant to review it because I was unreasonably irked by its moniker. My logic – such as it was – centred around a restaurant in South Africa being named after an Italian ancient grain when there are several delicious, indigenous ancient grains none of which has an eponymous eatery. Even in my most irrational moments, I understood that the lack of a restaurant named Mabele was not actually the fault of the people at Farro – especially since they bill themselves on their website as a ‘modern European’ restaurant. And that they are perfectly entitled to call their business anything they like. After a while, I also acknowledged that there aren’t enough good restaurants in Johannesburg to avoid one purely because its name annoys me. So, last week I gave it a go.

My meal began well with a startlingly strong, super delicious Old Fashioned cocktail (R75) and a bowl of bouffant, soft on the inside, crisp on the outside, sumac and smoked paprika infused beignets (R25). I was the designated driver so after that, I drank filtered tap water and a slightly odd, not very watermelony, watermelon cordial – which tasted as if it had been made with unripe fruit (R25). My husband ordered a carafe of Force Majeure Semillon (R150) from the interesting wine list which centres around small, independent winemakers and lesser-known varietals. 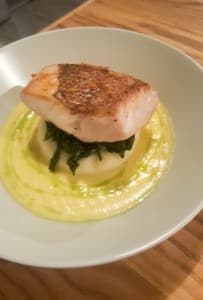 A shared starter plate of salmon tartare was complemented with but never overwhelmed by, a subtle saffron mayonnaise (R100). My handline caught Red Snapper main course came with buttery mashed potato and sweetcorn velouté (R180). It was very nice in a quiet sort of way. My husband had a pleasant plate of pork belly with red cabbage and apple (R170). Neither main course offered big, exciting, lose focus on your dining companion type tastes but you don’t necessarily want that from a meal with your nearest and dearest. Farro is definitely a date restaurant – on the evening of my visit almost everyone was eating in teams of two – and the food matches that mood. As do the engaged yet elegantly unobtrusive waiters.

It was the perfectly imperfect, hand-rolled peanut butter, chocolate truffles (accompanied by an excellent espresso) which added a little oomph to the evening (R30). Lavishly dusted with blissfully bitter cocoa powder, these rich, infatuating little follies were sprinkled with salt flakes which balanced the sweetness and brought out the exquisite spiciness of the chocolate.

In short, Farro offers quiet, classy, pleasant food with flashes of very pleasant. I wouldn’t write home about it but I would happily take my mother there if she came to town.

Puddings were seriously special. I had a superb vegan and gluten-free sorghum and amaranth chocolate cake with a banana beer sauce (R65). The cake’s crust was light yet crisp, the...