Something fabulous seems to be happening to the Johannesburg restaurant scene. Increasing numbers of young, black, highly trained, South African chef-patrons are emerging. And, despite the economic climate, they seem to be surviving and thriving – partly because they are hugely good at the sort of millennial DIY social media marketing that makes traditional public relations people nervous.

The latest such chef-patron is Ence Williams with his (sort of) eponymous restaurant NCW in Melville. Trained at the ICA in Stellenbosch with stints at Overture and Roots, Williams bought and then paid for extensive renovations to his restaurant’s Edwardian building by working for several years as a plumber. The pipes business must have been good because the space is now beautifully and luxuriously decked out in an art gallery meets gentleman’s club/ piano bar style. Rooms unfold into one another creating a simultaneous sense of privacy and gregariousness. The mirrored cellar is within strolling distance across the restaurant floor.

Each month chef Williams creates a menu to match the work of a local visual artist whose work is then hung on the restaurant walls.  The art rotates and currently John Vusi Mfupi’s collages and vibrant colours are inspiring the five-course tasting menu. I adored the concept and was inspired by the bravery of any young person who opens a restaurant in such a difficult economic climate.

The actual meal was a bit hit and miss. The compellingly golden, sweet, soft mealie bread was magnificent. The accompanying butternut soup was deconstructed – because as we all know, what a classic soup most needs is an autopsy. Brunoised vegetable chunks and a spiced ice cream were joined by a pleasant but unremarkable ginger consommé. Sommelier Justin Tombo saved the day with his Raats Original Chenin Blanc pairing which brought just the right fresh, zesty fruitiness to proceedings. 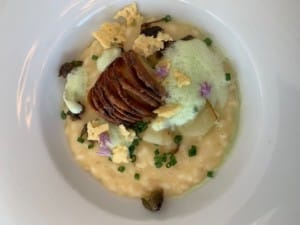 A creamy potato risotto followed. This dish was explained by the chef as a tongue-in-cheek reference to his mother’s (classically South African) tendency to double starch every plate she served. At NCW, a third carbohydrate came in the form of a glass of Fledge and Co Vagabond. What’s not to love about buttery carbs on a winter day?

Several unremarkable courses followed so I won’t remark on them. Except to say that they weren’t awful. The technical triumph of the meal was pastry chef Ofentse Mathope’s oval white chocolate coated vanilla panna cotta with a granadilla puree centre. The afore mentioned ‘egg’ cracked when you hit it with a teaspoon. Dig in and you find the fruity yolk. I generally prefer my desserts less fussed over but only a very mean lady would not be charmed by the care that had gone into each ginger biscuit twig entwined into my egg’s surrounding ‘nest’. Plus, there was Overgaauw Cape Vintage port. R445 without wine, R685 with wine.