Brick and mortar restaurants are increasingly storefronts for online delivery services. For all but the most special of special occasions, dinner from a restaurant is replacing dinner in a restaurant. There are all sorts of reasons why ordering in and having restaurant food come to your home is sad – most notably that a chef/ restauranteur can and does do so much more than just make individual meal components. They curate a whole epicurean experience. Menus are planned and balanced. Thought goes into wine lists, music and decor. A delivery ordered online disrupts and disrespects such skills.

And yet, these days, almost everyone orders online from restaurants at least some of the time so it is odd that such services are almost never reviewed. Some chefs can create dishes that travel well. Others? Not so much. There is no point in ordering restaurant food that arrives chez vous as a pale imitation of its former self.

Chef Andrea Burgener of The Leopard at 44 Stanley, Milpark does damn fine delivery. She still has a small space with tables and chairs for those who want to dine out à la old school but a great deal of her time and energy is now spent on sending her delicious dishes out. Hers is not an instant call-a-pizza at the last-minute type service but rather requires 24 hours-notice. She can send food for up to 50 people but is also happy to do dinner for one. Hot dishes are sent cold with heating instructions. A flat delivery fee of R60 is charged for the first 10km from the restaurant after which it is per kilometre rates as per delivery partner Picup.

In the various restaurants that chef Burgener has run over the past two decades, she has won almost every award imaginable. I have eaten at and adored The Leopard on numerous occasions. Her food has always been and continues to be sustainable and ethical in all the ways one wants. She is exactly the sort of thoughtful and witty chef where value is added by going into the actual eatery. The personality of the chef, her décor and eccentric waitering style are part of the package but we live in a world where people increasingly want to eat restaurant food at home, on the sofa in their pants. So, I tried it. 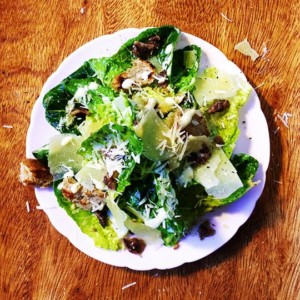 The component parts of my ‘Son of Caesar’ salad (R78) came separately for home assembly. There was a pleasing Parmesan meets anchovy tang to the dressing, crisp, organic Cos lettuce and superb sourdough garlicky croutons. My husband’s cucumber gazpacho (R60) was light, refreshing and herbaceous. The perfect cold soup for a summer day. The generous portion of spinach and jersey-milk ricotta malfatti (R78) came with an intensely flavoursome Napolitana sauce. The grass-fed, slow-braised, sweet, tender  Osso Bucco (R92) was bathed in a superb sauce rich with lemon rind and white wine. Plus buttery polenta and great gremolata.

The small, entirely South African wine list has a focus on lesser-known wineries. There is next to no mark-up – some bottles are sent out for less than the price given on the Makro website. There is sufficient variety to suit each and every one of the eclectic dishes on the menu. 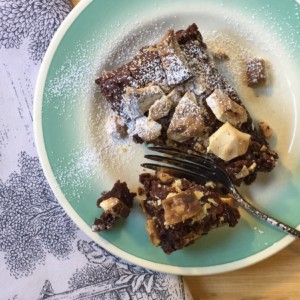 The strength and weakness of eating in is that there are fewer social sanctions. No one but your nearest and dearest see when you run your finger around the edge of the plate to get at the last drops of sauce.  Online there is no one to protect a person from themselves. I had a rush of blood to the head and clicked on both the whole lemon almond cake (R280) and also a portion of chocolate brownies (R38). Had I been in the actual restaurant I would have made more moderate choices that reflect the kind of person I wish I was rather than the glutton that I actually am. Ordering without observation by my peers gave me liberty to ask for double dessert. The almond and lemon cake was both deliciously rich and surprisingly light, which allowed for the ingestion of more than was strictly wise. The brownie (made with Fairtrade chocolate and free-range eggs) was divinely dark and fudgy inside with just the right crunch to the cracked crust. Walnuts added a pleasingly crunchy counterpoint to chocolate. And who doesn’t want that in their life?

The Coronavirus baking phenomenon and a great cookie recipe

What follows is my favourite chocolate chip cookie recipe. Expect gooey on the inside, crisp on the outside, beautiful biscuits. Great with milk. Even better with a glass or three...

Anna Trapido: SA restaurants in the time of Coronavirus

Of all the economic activity damaged by the novel coronavirus (COVID-19), few have felt its impact as immediately and as deeply as those in the hospitality business. All over the...

First up was prawn cocktail which was served 1960s style with five fat peeled prawns hanging from the edge of a glass. Inside, layers of crisp lettuce met the generous,...