I ate in two Johannesburg Indian restaurants last week. Neither was perfect but then life seldom is. My first eating experience was a lunch at Thava in Norwood. Thava is a modern restaurant with flattering lighting, a cosmopolitan clientele and minimalist chic décor. The culinary concept is South Indian Keralan cuisine meets small plates/ tapas. A few days later I had supper at Taste of Punjab in Sunninghill. This North Indian-style family curry house is located inside what was previously a sports bar. Lighting is harsh and there is a really big, big screen TV at the bar. In place of a culinary concept there is a Punjabi mother in the kitchen with a ladle. 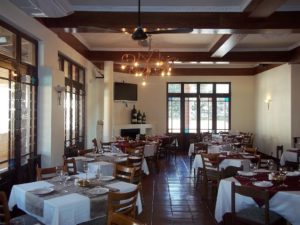 Perhaps the rudeness of the waiter at Thava was conceptual but it was hard not to take it personally. I know my waiter’s name but I am withholding it in case he is actually an undercover experimental psychology student conducting research into the role of dismissive and bullying behaviour on customer tipping practices. I wouldn’t want to get him fired before his data collection is complete.

The trouble began with the wine list. On paper the Thava beverage selection is impressive. Mark-ups are low. It is short in the sense that it is concise rather than that it is missing anything. All the well-known names and varietals are represented. There are sufficient curry-friendly sweetish, bubbly options. So far so good but when my friend took a look and picked first one and then an alternative option from the wine list neither were available. The waiter said “we are changing it’ then folded his arms, fixed my wine-ordering friend with a steely stare and told her that she would “have the Chardonnay”. She said that she didn’t want the Chardonnay but he brought it anyway. What can only be described as a battle of wills ensued. There was much sighing and eye rolling as we asked him to look and see if the listed Gewürztraminer was in stock. Perhaps I am imaging gendered slights where none exist but I don’t think so. He didn’t seem to be being so bossy with the neighbouring table of business men.

It’s just as well we got the Gewürtz because it dulled the pain of our waiter being similarly dismissive and coercive in the matter of our food choices. Everything we tried to order was unavailable and a considerably more expensive alternative was not so much suggested as barked at us. He didn’t pick well. Starters were unpleasant. Prawns were disconcertingly cochineal pink, deep-fried doughy things. The mashed potato balls labelled on the menu as Punjabi chaat were laden with the unprovoked violence of raw onion chunks. Our waiter chose not to ask as to why we had left both half eaten. We dredged desultory poppadum fragments through bog-standard mango chutney as we waited and waited and waited for the lamb ularthu (billed on the menu as having been “cooked with sliced coconut and coconut milk with onion, tomato, ginger, garlic, curry leaves, green chilli, black pepper, chilli powder, garam masala”) . When it finally arrived it had the bitter, dense taste and texture of a sauce that had over reduced and then burnt. The prawn curry was described on the menu as having been made with “chef’s secret recipe”. Perhaps his secret is that it is made with the same sauce as the butter chicken – I can’t prove it but a cross-table taste test suggests that the kitchen is practicing a one-sauce-fits-all approach.

Even if I am wrong and the sauces came out of different pots, they both tasted castrated and muted. As if in doing up the décor, the great, ancient complexity Indian food had been done down. Why is this so often the case with posh-nosh Indian establishments? There is no reason why employing an interior decorator should nullify flavour but it often (not always but often) does seem to indicate altered priorities. 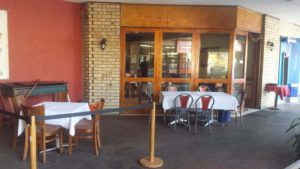 A few days later I accompanied a different friend and her children to Taste of Punjab in Sunninghill. Taste of Punjab is marginally cheaper and infinitely tastier but no one could call it elegant. Think Formica tables and polystyrene ceiling tiles. The acoustics are bad and the sound of happy family diners carries and deafens all attempts at intimate conversation. The wine list is not much a wine list as a liquor list with distilled beverages taking the lead. The charming waitress, Topsi, let us order whatever we liked so we started off with a round of gin and tonics and a generous pile of light, bouffant pan puri chaat. They were an education in what Punjabi chaat taste like when there is a Punjabi at the stove. Unlike their Thava equivalents, these street food one-bite gems were exquisitely layered with taste and texture. Each one offered an instant satisfying hit of rich, full flavour. Butter naan breads bigger than Swaziland were perfect for mopping up the crisp, light green herb intensity of coriander, mint chicken sauce. Spicy, sour, sweet chana masala chickpeas offered an exciting contrast to a prawn korma rich and generous with cashew nuts. The pineapple raitha was nice, too.

The Thava waiter is not the only one conducting a scientific investigation. Mine explores the prevalence of perfect soji semolina puddings in South Africa. My null hypothesis is that it is impossible to beat the version made by my friend Dasi’s aunt in Chatsworth. So far no one comes close but hers is my favourite dessert across any food genre ever so the bar is set high. The soji at Taste of Punjab is very good – not quite as good as auntie’s but very good – gloriously buttery and cardamom infused with flaked almonds on the top. It absolutely hit the comfort food conclusion hot spot.

Poor Topsi, the desire to avoid fuss and angst meant that I tipped an identical standard percentage in both establishments. In a just world she would have earned so much more than her officious Thava counterpart. Who knows whether this supports or rejects the experimental psychologist’s theories? I know it makes me a woes of the worst sort.

Anna Trapido: What becomes of communal dining after Coronavirus?

There is no point in sugar coating the situation. All over the world restaurants as we currently know them are being decimated by COVID-19 and its associated lockdown restrictions. In...