If the world changed and I became a vegan tomorrow, where would I go out to eat?

I mean where would I go as a food writer? Say I didn’t care about health or virtue or Instagram, and all I really wanted was deliciousness. I mean, what if I only wanted do-no-harm food that made stamp my feet on the floor because the food was so amazing?

Lucky for me in this imaginary scenario, I’ve been doing some research. It’s nowhere near the amount of research real-life vegans do, but it has a unique angle: deliciousness. Just that. I’m always looking for umami and crunch and salt and fat and ooze and zing – along with complexity and honesty and inventiveness and care – and these places, or dishes, hit the mark.

I’ve visited Maria’s Greek Café in Gardens several times this year and I love it as much as I did in the eighties. Yes, it’s been open that long.

This is the vegan platter I ate at Maria’s: garlicky, crispy falafel; smooth and nutty humus; calamata olives, marinated red cabbage; soft-centred zucchini and aubergine “tempura” and skorthalia, that white dip with walnuts, garlic and potato. Every element was perfection.

Anatoli, a Turkish restaurant and another old favourite that has lasted since the ‘80s, also does an excellent vegan platter.

If I woke up vegan tomorrow, probably the first thing I’d do would be to stock up on take-away curries from Prashad Cafe. I don’t care for the fake chicken dishes but I adore the bean dishes, the yellow dal, the mushroom and vegetable breyanis and the samosas – especially the potato samosas. As the spicing is on the gentle side, I order everything “hot”. Exciting news is that Prashad Vegan Café has just opened in Woodstock. Prashad Café (formerly Maharajah Vegetarian) in Rondebosch is still going strong, as is Prashad Café in Kloof Street. I’ve been meaning to get to Govinda’s Natural Food Café in Rondebosch and now that I’m a vegan, I certainly shall.

At the weekend, I would head to the famously delicious Thali for an eight-dish vegan meal including a hing-flavoured aloo gobhi (dry potato and pickled cauliflower curry), a smoked tadka dal and a gourmet spring vegetable curry. The numerous sides include a handmade hot chilli sauce, a zesty onion salad and a rich tomato chilli jam.

For a gourmet evening I’d head to Sepial’s for chef and owner Sepial Shim’s Korean-inspired mushroom and glass noodle japche. This dish is a triumph of meat-free umami, a kind of very refined, contemporary Asian take on spaghetti Bolognese.

If you type “Cape Town Vegan” into your Search bar – as I have, several times this year – you’ll find lists of plant-hung establishments (mostly in the city) that feature juices, smoothies and coffees on the drinks menu and looky-likey burgers and cakes on the food menu.

To be fair, I haven’t eaten at most of these places. I’ve never been drawn to what I think of as “spa food” – and I haven’t given up burgers or cakes so I don’t crave equivalents.

In an open-minded moment one morning, I ordered the green smoothie bowl at W Café. It tasted good but cold green purée is difficult for me to eat at any time of day. It was especially tricky so soon after rising. 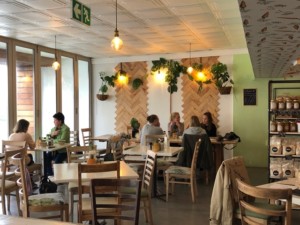 Mary-Ann’s Emporium & Eatery is more my speed. Mary-Ann’s opened in 1991. It is a very well-established and classy establishment. The vegan lunch buffet groans with health-conscious bakes, soups, salads and breads. The array of vegan condiments and toppings is dazzling.

Mary-Ann’s does an excellent morning coffee with almond or soya milk. I also approve of Mary-Ann’s Swiss-style muesli, with berries, seeds and roasted slivers of coconut. I ate it at home though, with grated apple and full cream yoghurt. As a vegan, I would have to try it with coconut yoghurt.

In my new, non-real life, the vegan almond croissant from Salt in Kalk Bay would appear, miraculously at the side of my Mary-Ann’s coffee. Morning patrons at Salt have begged me not to write about this extraordinary confection. A limited number of the lovingly handmade beauties are delivered every morning. They run out in a flash and the locals want them all.

I disagree with my friend in Muizenberg who rated the vegan croissant at Ohana, also in Kalk Bay. I found it heavy and oily.

On Saturday, I might pop a jar of Hellmans vegan mayonnaise in my handbag and head for 1890 House of Sushi in Observatory. The vegetarian rainbow roll features avocado, pickled radish, cucumber and nori seaweed. Substituting vegan mayonnaise would make it vegan, right?

Could I also have vegetables in black bean sauce? Bean curd nigiri? Miso soup? And the vegetarian California roll, hand roll and fashion sandwich without the mayo? I think so.

On Saturday night, would I be queueing at Lekker Vegan for a gatsby? I would not. I did that once and it was not to my taste. I recall a lot of pale, tasteless, fried things with nasty processed sauces and mounds of heavy white bread. The young people seem to love it, though.

I do like Spirit Café in Constantia. I had a pleasingly tasty vegetable bake there recently. One is wary of a vegan bake. It can be a frumpy, unseasoned mess of chickpeas and goo. The one I had at spirit Café had a deep, complex flavour that was almost – dare I say it? – meaty. The chef had very sensibly used sweet tomatoes, smokey aubergines – and seasoning.

Spirit Café’s cakes are famous. I might love them more when I’m an imaginary vegan, but earlier this year I found my slice a little dense and perhaps even a little wet. My next vegan cake will be Shim’s “death by chocolate” cake. Like her vegan croissants, it is the stuff of social media legend.

Mary-Ann’s does a sigh-inducingly delicious roasted mushroom as part of her lunch buffet. I loved it with the homemade chilli pesto. I liked her chopped corn salad a lot too, and the cashew mayonnaise went well with the vegan pizza. I liked the vegan butter, made of coconut oil, olive oil and turmeric. The gluten-free bread was impressive, especially the crust. Both times I ate lunch at Mary-Ann’s I felt noticeably good afterwards – not full, not heavy, but nourished and light.

Other lunch options? I like a Kauai salad as much as the next person. I also like a salad from The Olympia Café (hold the goats “chiz”). But my top salad awards go to The Kitchen in Woodstock.

A vegan must learn to love salad as a meal. In my dream journey to veganism, I choose Karen Dudley to ease me into beets, roasted root veg, lentils and greens for lunch. At The Kitchen, coleslaw is delicious. Dudley makes broccoli delicious. She pickles raw cauliflower. She is very, very good at salads.

I’ll take my first step out of my comfort zone into The Kind Kitchen in Woodstock. Here, it’s possible to order not just vegan steak, but also vegan boerewors, chicken mayo, fried eggs, fried fish and turkey. I can’t speak to the tastes yet, but as a cooking exercise alone, that’s impressive.

Lockdown is upon us and the habits of restaurant lovers are set to change in the next month or so. What to do if you like being cooked for? Consider...

“Oh yes, a salad. Uh, let’s just get a simple one; this ‘rocket and Pecorino’?” I’m not a fan of salad. I’m more than happy for other people to have...

I am besotted with the new restaurant at Blaauwklippen in Stellenbosch. The food is delicious and interesting, but what I love is how your feel like your meal has been...