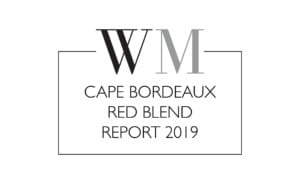 65 entries were received from 53 producers for this year’s competition and these were tasted blind (labels out of sight) by the three-person panel, scoring done according to the 100-point quality scale.

The top 10 wines (with rating alongside) are as follows:

Botanica, as the producer of the wine judged best overall, won a new 300-litre Selection barrel worth €903 (equivalent to R14 330 at the time of writing) from Tonnellerie Sylvain.

To read the report in full, including key findings, tasting notes for the top 10 and scores on the 100-point quality scale for all wines entered, download the following: Cape Bordeaux Red Blend Report 2019

We’re offering you the chance to win a six-bottle mixed case of top-performing wines from this year’s Cape Bordeaux Red Blend Report. Wines on offer include: Babylonstoren Nebukadnesar 2017 –...

Entries for the fifth annual Cape Bordeaux Red Blend Report are now open – the style defined as wines made from two or more of the following varieties: Cabernet Sauvignon, Cabernet...

Best wine overall in this year’s Cape Bordeaux Red Blend Report was the Zorgvliet Richelle 2016 and the prize for producing this, a 300-litre Selection range barrel from Tonnellerie Sylvain...