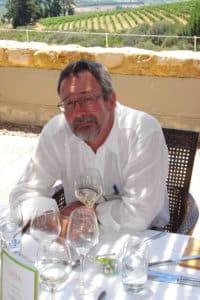 The Katbakkies 2008 was rated 4 Stars and placed among the Top 12 at this year’s Wine magazine Chenin Blanc Challenge. When it came to the scores of the individual judges, there was quite a broad range of scores: panel chairman Michael Fridjhon and Michael Crossley both awarding it 17.5 out of 20, Cathy van Zyl MW 17, Ginette de Fleuriot 16 and myself liking it least with a score of 15.

Wine writer Neil Pendock bemoans the lack of consensus among the judges at this year’s competition in two postings (here and here). I’m no statistician (thank goodness) but I think Pendock misses the point of the collegial approach to wine assessment.

What happens at both Old Mutual Trophy Wine Show and Wine magazine tastings is that after the tasters have judged the wines independently, ratings are awarded on the basis of discussion that involves retasting were necessary. An individual judge is therefore able to adjust her score for a particular wine up or down, should she be swayed by the arguments of her fellow tasters, but ultimately is beholden to take a stand on that wine  depending  on her considered opinion of what’s before her, knowing that she has a shared responsibility for the final average score that is generated.

The averaging effect is therefore both the greatest weakness and greatest strength of panel tastings. By averaging the scores for Katbakkies, for instance, it is not communicated to the public quite why Fridjhon liked the wine so much, nor why I was less impressed with it (for the record, I found it made in an extravagant style, very buttery rich and full). However, that it rated 4 Stars rather than a very high 4½ Stars as Fridjhon would have it or 3 Stars as I would have it, is probably a more valid assessment of the wine in terms of what most wine enthusiasts would make of it, should they encoutner it. (It’s ratign in Platter’s 2011? 4 Stars…)

The alternative is the pronouncement of the individual, allowing those who follow him to calibrate accordingly.  It is interesting to note that Pendock has recenly started to write up a wine of the day and then provide a rating (something that he seemingly does sighted though he usually argues the superiority of juding blind). You can decide which approach works best for you, but as with all matters of aesthetic criticism, common sense surely dictates that you compare and contrast various sources before making up your own mind.