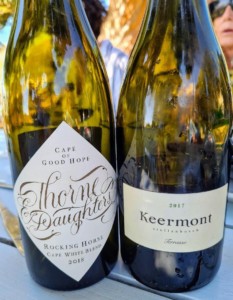 With Cape Town enjoying clear if windy weather this past long weekend, Cape White Blends became something of an impromptu theme, some of the wines consumed including Keermont Terrasse 2017, Mile Mossop Saskia 2018 and Thorne & Daughters Rocking Horse 2018, stuff to lift the spirits in these uncertain times.

The South African wine industry has been characterized by a lot of negativity since the Covid-19 crisis began. There was the widely quoted figure emanating out of producer body Vinpro in the second half of 2020 that “more than 80 wineries and 350 wine grape producers would go out of business over the next 18 months” due to lockdowns and alcohol bans while at the beginning of this year, there was extreme anxiety about what was to become of the unsold inventory of close to 300m litres of wine as the current harvest rolled around.

Since then, not much. Relatively little celebration of the fact that wine exports in 2020 were just about stable – down 0.2% in volume and up 7.7% in value compared to 2019. As for the 2021 wine grape crop, Vinpro reports that is expected to be slightly larger than in 2020, but still smaller than the 15-year average of 1.37 million tons, presumably a good thing if surplus is such a big concern. Most wine grape growing regions are harvesting about two weeks later and by all accounts flavour development is looking fantastically good. No accounts of any high-profile wineries shutting up shop, either, or at least none that have reached our ears…

So what’s going on? The reference to Terrasse, Saskia and Rocking Horse above is to illustrate once again the divide between “fine wine” like these and “commodity wine” and while these two sectors are interconnected, their fates aren’t necessarily the same, at least in the short-term.

Moreover, it is unlikely that the impact of Coronavirus is going to be quite as sudden and devastating as we all initially feared. Rather, it’s biggest effect is going to be to magnify and accelerate certain patterns that were already there.

There’s been a process of fundamental structural change happening since the early 1990s. Until then, KWV had provided surplus removal and minimum wine price support, many farmers depending on these safety nets for their existence. Once the ANC became the government of the day, KWV lost its statutory powers and the number of primary grape growers has fallen ever since, dropping from 4 786 in 1991 to 2 778 in 2019. This exodus from the wine industry is surely set to continue as a result of Coronavirus but the effect of the pandemic must be seen in context.

A beneficial outcome of political transformation, meanwhile, was that the trade sanctions were lifted and the industry again had access to international markets. The decline in growers was therefore matched by a dramatic increase in the number of wine cellars crushing grapes – from 212 in 1991 to 582 in 2011. However, this trend is now seemingly in reverse, the total number having dropped to 533 in 2019.

Of note, however, is that the number of commercially available labels has not decreased, perhaps because producers are increasingly inclined to share winemaking facilities to keep production costs down. Micro-cellars (vinifying fewer than 100 tons) make up approximately 40% of all producers and have become a powerful force in the industry. They are often the most cutting-edge producers in terms of both production techniques and marketing. The point is that the industry, at least at the top-end, is continuously becoming more focused and streamlined. There is no doubt going to be some churn lower down but rather than imagining a doom-and-gloom scenario of families having their farms sold out from under them with resulting unemployment for labourers rather envisage a professional farming echelon leaving wine grapes for other more profitable crops, whether these be berries, citrus or nuts.