One thing we could always count on while working in the European fine wine trade was a safe, secure, sedate working environment where little changed year to year and most things were constant. Our biggest threats were not a social revolution, economic hardship or political strife but perhaps at worst a severe frost in Chablis or an aggressive hailstorm in Burgundy. Politics had relatively little impact. As a South African based in London, what I always found fascinating was how European social systems could flick the tribal political switch on, rally the troops to cast their votes and then flip the switch back off post-election for another fairly sedate half-decade of indifferent politics whoever won the spoils.

How the tables have turned. The Brexit dynamic has changed not only the general political playing field but indeed the whole culture of an accepting, diverse, free-spirited environment of differing opinions. Polarisation and entrenched tribal divisions are the new normal where dissent and disagreement are rarely greeted with the same old nonchalant attitude of “everyone is entitled to their own opinion” and everything carries on regardless. No, times are volatile and revolutionary and this is starting to disturb a lot of people not used to real upheaval and change.

For us South Africans in London, well, it’s just another day at the office. We are of course much more used to and attuned, rightly or wrongly, to a much faster moving, turbulent world in South Africa both in our day to day living but also in our long-term outlook. ‘Change management’ has long been a South African buzz word and now again, it’s a key skill and resource greatly valued in many strands of business in the UK as multiple industries struggle to adapt. 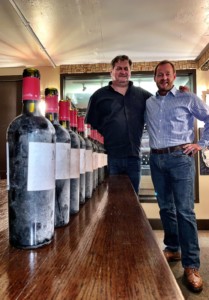 That said, the UK still sits at the epicentre of the global fine wine trade while the South African industry, like the Chilean, Argentinean and that of our antipodean cousins Australia and New Zealand, still drift on the periphery of the fine wine mainstream. But as one reflects on another year that has passed yet again all too quickly, it is undeniable that South African fine wine has struck a populist cord and reached a new level of fever-pitch demand among UK collectors in 2019. Whether it was as a result of the new release of Bruwer Raats’s MR de Compostella or the 2017 offering of Vilafonte Series C, the Alheit 2018 single vineyard Chenin Blanc feeding frenzy or the more relaxed spreadsheet client allocations of Eben Sadie’s 2018 Old Vine Series wines, the common thread has been the insatiable demand for an admittedly small list of wines, but nevertheless for a group of producers that is importantly being augmented slowly every vintage that passes with one or two new cult names.

These new additions may not always be unknown to the internal South African industry, but they quickly become much revered in the minds of a younger generation of European fine wine consumers – producers making big waves include Sam Lambson of Minimalist Wines, Guillaume Nell of Lysa, Berene Sauls of Tesselarsdal, Jessica Saurwein and Sakkie Mouton of Revenge of the Crayfish. Similarly, stalwarts like Thelema and Le Riche are resurgent and hence finding a new legion of fans.

Those who reached adulthood in the 1960s and 1970s were inevitably converted to the ways of Bordeaux and Burgundy, and these habits die hard – these boomers are still the biggest consumers of French premium wines from these classical regions. But can you even imagine if the same was to hold true for the contemporary generation of wine buyers currently besotted by the dynamic quality offerings of red and white wines from South Africa? On all evidence at hand, this new generation looks set to be our biggest champions, our principal supporters and our biggest collectors in the future ahead. As Rodriguez proclaimed back in the 1980s… this is a concrete cold fact!

One is regarded as a relatively ancient, classical variety while the other is seen as a fairly boisterous nouveau creation. But both Cinsault and Pinotage can comfortably be regarded as...

One of my last trips to France pre-lockdown was an inspired long weekend excursion in late July to Bordeaux just before the annual French summer holiday shutdown began, to meet...

I was recently asked, “What do I think is the most valuable quality of a fine wine buyer? A great palate? Understanding the global fine wine market? Knowing the top...