Michael Fridjhon: On the draft liquor bill and its impact on marketing

Wine-drinkers who think that regulation around the sale of liquor is unlikely to have any impact on their being able to enjoy their favourite tipple might have to think again. A year after the DTI published its discussion paper around liquor legislation, it has issued a draft liquor bill and given the trade and public a month (which ends on 30th October) to provide input on its many provisions. While several of the proposals appear technical in nature (trading conditions, location of retail licences) almost all of them could contribute to the decline in retail sales. One, at least, could cause a swathe of insolvencies in the winelands of the Western Cape.

Most of what the DTI is seeking to enshrine in the new act is prohibitionist in nature. For example, it wants the law changed so that there are no retail licences within 500 metres of schools, places of worship and transport routes. At a stroke of the pen there would then be no licensed restaurants in the Waterfront and no bottles stores pretty much anywhere in urban environments. It also wants to raise the legal drinking ago to 21, which would drive young potential wine consumers out of the liquor industry and straight into the arms of drug dealers (unless they chose instead to buy any one of the many different illicit ‘ales’ whose current annual volumes are estimated to exceed those of South Africa’s fine wine market).

There is also a clause which wants to make licensees vicariously responsible for damage and injury caused by inebriated consumers. Imagine that a small (and marginal) wine farmer supplies wine in good faith to a wine merchant, who in turn sells it to someone who turns out to be an unrehabilitated alcoholic. He gets behind the wheel of a car and causes a catastrophic accident: in terms of the proposal the vendors could be liable for millions of Rands of damages. The same onus is not imposed on the manufacturer or supplier of the motor car, or the petrol company which supplied its fuel. Ludicrous as this regulation is, it opens the door for claims against Dunlop and Firestone for tyres used in ‘necklacing’ and Zwilling for steak knives used in domestic stabbings.

If the DTI has its way, licences will only be issued (and ultimately renewed) to Level 4 BEE compliant entities. This is not an unproblematic clause insofar as it affects existing licensees (since it would involve a property expropriation). It would certainly put pressure on specialist wine stores, many of which are run as much for passion as for profit. Giving away half your business simply to obtain a licence renewal could be considered a real disincentive to staying in business. With Grocers Wine Licences already under threat (they now no longer exist in the Eastern Cape and could also bite the dust in the Western Cape) simply finding a wine stockist with a reasonable selection could prove something of a challenge.

However, curiously, it is one of the least offensive and therefore least controversial clauses which is likely to have the greatest impact on the Cape wine industry: the proposal to ban on-air advertising until after 10 pm. On the surface, there is nothing here to worry the average fine wine consumer. Very few of the country’s top wineries commit to above-the-line advertising – partly because there is an implicit sense that anything worth drinking should be on allocation and therefore should not require anything as crass as a sales push. We certainly don’t imagine fine wine producers waiting to send a message to the market over national media at a time when impressionable youngsters should be tucked up in bed. 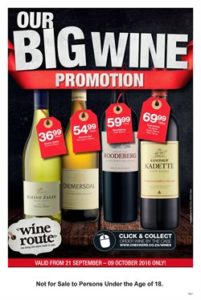 However, as anyone who has ever looked at the wine merchants’ Xmas catalogues will have noted, even the most prestigious cellars engage in some kind of below-the-line cooperative promotion with the more upmarket retailers. Essentially they have made this small but cost efficient niche the kind of space they can play in while the large producers invest the big money in national campaigns. If the draft bill becomes law, the major brand owners will be faced with a choice of advertising on TV after 10 at night, or choosing to spend that money where there’s a proven audience, which is with the retailers. Suddenly the cost of space here will sky-rocket and everything from a share of a catalogue to the price of on-shelf listings will go up as the big cellars slug it out for dominance in the retail sector.

There can only be one class of victim in this show-down – and this is the small producer, already battling to make ends meet as grape and wine prices stay obstinately low and funds available for marketing are never enough to buy more than a facing here, and a catalogue entry there. It won’t take long for the whole game to change: the adspend which used to flow into the coffers of the broadcasters will find a new home in below-the-line, inflating costs here and making this an unviable alternative for the smaller cellars. It’s hard to predict the scale of the attrition, but with over 50% of the country’s wineries under-recovering on their true production costs, this could be what opens the proverbial floodgates.