Scoring is boring but necessary 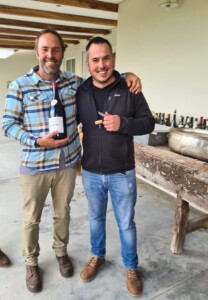 The 2021 vintage of Skurfberg, the Chenin Blanc from Citrusdal Mountain that forms part of The Old Vine Series from Sadie Family Wines has an alcohol of 14.1% and I find it a forceful wine. Have the wines from this part of the world become richer and riper on account of drought? “If anything, we trying to pick earlier,” says Eben Sadie. “However, Skurfberg is the one wine we allow to go over 14% – it’s a big, bold place after all. Pick too early and you don’t reflect the site”.

‘T Voetpad 2021, meanwhile, a Swartland field blend of Chenin Blanc, Palomino, Semillon Blanc and Gris has an alcohol of just 12.7% and while I like it for its elegance, Sadie seems to think that it may be a little underdone.

There’s also the (somewhat complicated) glucose-fructose issue. Glucose and fructose are the two main sugars in wine must. most of which get converted into alcohol and CO₂ during fermentation. During drought, vines under stress consume more glucose, the resulting grapes relatively higher in fructose. Yeasts tend to consume glucose at a higher rate than fructose in any event, and unutilised fructose can give the impression of greater ripeness in the end-wine.

Winemaker Abrie Beeslaar makes various points, not all of them mutually reinforcing. He declares himself somewhat skeptical of the “Light Pinotage” phenomenon saying that he suspects that those producers are making such wines fear the variety’s typically quite aggressive tannins. “Pick early, however, and you don’t show site,” he observes.

Even so, he’s not denying that Pinotage tannins are something with which to contend. “You must work around the phenolics. One way is to pick super-ripe but then you lose varietal character. Another way is whole-berry fermentation. Our approach, however, is careful extraction – we use a process of punch-downs in open-top fermenters”.

As for the Paul Sauer 2019, Beeslaar describes vintage conditions as “very confusing”, the carry-over effect of the previous three years of drought at play. “We picked the older vineyards before the young, which is not how it should be. I don’t understand the resulting wine but I’m happy how it turned out”.

What all the above goes to show is that 1) picking date is a pretty crucial part of the winemaking process; and 2) what Eben Sadie or Abrie Beeslaar considers “optimal ripeness” may still differ from you or me. Even so, any producer picking extremely early or late might end up with stand-out wine but has probably lost both varietal character and terroir, at least to some degree.

At a time when the likes of Sadie and Kanonkop as well as Boschkloof, Crystallum, David & Nadia, Leeu Passant and Rall are all coming to market simultaneously, it’s clear that the overall level of quality is not in question. Instead, what’s at stake are matters of style. This poses the question: Wouldn’t it be sensible to dispense with scoring altogether given what a fraught undertaking it is with often imperfect results?

I would argue that a score is the starting point in the conversation about any particular wine rather than a definitive judgement. A winemaker brings his or her aesthetic to bear in creating a wine and a critic of suitable knowledge and experience takes a view on how pleasing to the senses that wine is. We should be on our guard about any critic or competition that claims to be the ultimate authority on what constitutes wine quality and rather look to facilitate an endless discussion that keeps quality a relative concept and constantly promotes change for the better.