Tim James: Advances and stagnation in the Wine of Origin system 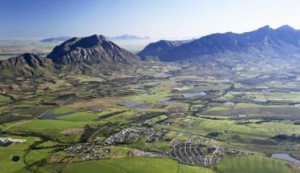 Tulbagh – not that maritime.

And so the Wine of Origin system marches on … with the Wine and Spirit Board’s Demarcation Committee doing some useful work in terms of new areas (as well as some rather odd work), and continuing to fail to grapple properly with a Coastal Region that still absurdly includes some unquestionably far-inland districts.

Looking back on old notes and blogs, I see that as far back as 2011 I reported that the Committee was looking into developing the useful concept behind the welcome new Cape South Coast Region. They were considering two new regions: Cape West Coast and Cape Coast to replace the Coastal Region. Unfortunately, they remained stuck with Paarl, Wellington and Tulbagh in these proposed “coastal” regions – none of them having a connection anyone else could see with either the Atlantic or the Indian Oceans.

Nothing came of these proposals, and in 2014 they tried again, announcing that a similar idea was being “considered”. They continued, for whatever reason, to bravely defy all viticultural and geographical logic. Again nothing happened. Who knows why – let’s hope they were persuaded by such a torrent of scornful and irate objections that they simply couldn’t proceed. (And why not do the sensible thing and create some sort of Cape Inland region for areas with no plausible connection to the sea? I presume the big producers which find the Coastal Region useful for their production plans and their marketing brought out their persuasive guns…

The latest significant “coastal” proposal has some real sense to it, connected to both geology and climate. The Cape West Coast demarcation is envisaged as something totally new to the structure of the Wine of Origin scheme, which has always been like those Russian matryoshka dolls: the smaller insider the bigger. But the new Cape West Coast is not within anything else. It’s a sort of sub-region straddling the Coastal and Olifants River regions. It includes just the coastal part of the Swartland, as well as the Darling and Lutzville Valley districts, and the wards Groenekloof, St Helena Bay, Lamberts Bay, Bamboes Bay and Koekenaap.

I’ve heard there was some disagreement before this final shape was given to the proposed Cape West Coast “sub-region”. As always, economics and politics and powerful entrenched forces came into play – but the result is plausible, even attractive. The problem is that it is simply evading the mess of the Coastal Region, which remains as is.

That problem is maybe even being retrenched. There now will be, perfectly properly, a Cape West Coast (overlapping the Coastal and Olifants River regions) as a counterpart to Cape South Coast. With a gap in between those two (consisting largely of Stellenbosch and Cape Town districts) that should also get a proper Coastal name. But as long as the Demarcation Committee is persuaded by entrenched powers that they can sniff the sea breeze in Tulbagh, Paarl and Worcester (and much of Swartland, of course), well, we’re stuck with an absurd catch-all Coastal Region that the big producers can stick proudly on their labels and pretend they’re really talking about a meaningful origin.

Talking of big producers and their needs, another new Wine of Origin proposal comes motivated by Leeuwenkuil, to introduce an “Overarching Geographical Unit” called Greater Cape, to include the Eastern Cape, Northern Cape and Western Cape. Who’d have imagined that anyone would really want to blend wine from all that diversity? Who could possibly think it to be meaningful? Leeuwenkuil, clearly.

A rather different sort of ambition is evident in the Northern Cape. Did you know there is a present award called Central Orange River? Do you think you might want to know? Well, there is – it’s a long strip of hot, irrigated, bulk-wine-producing vineyards along the river. It seems the devoted producers there have the same sort of care about terroir that prompted the Hemel-en-Aarders to divide up their precious patch of earth into three wards. Central Orange River wants to become a district with five new wards: Groblershoop, Grootdrink, Upington, Keimoes and Kakamas. Look out for WO Grootdrink on your bottle. It’s odd how the areas with what one might have thought the least devotion to terroir are the keenest on making new wards. Robertson has 14 wards (Stellenbosch has only seven – but see here for some observations on that). I’d love to give a prize to any non-Robertsonian who could name even half of the established Robertson lot, and another prize for naming the five newest additions (I’ll do it for you, though I’m not convinced you really care: Ashton, Goedemoet, Goree, Goudmyn and Zandrivier); please someone prove my scepticism wrong.

Some other recent demarcation declarations seem more meaningful: the ward Nieuwoudtville is already used by Tuebes family Wines, up near Vredendal, for a rather nice sauvignon blanc. Another new ward, Springfontein Rim, in the Walker Bay district, is being used by Springfontein Wine Estate for wines off its limestone soils. I believe one can find agglomerations of ancient seashells in the vineyards. Bit I’m doubtful you can find echoes of the sea in Tulbagh.