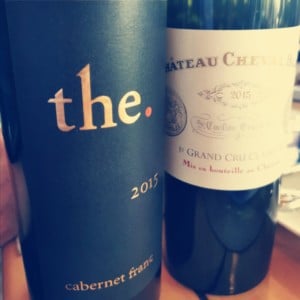 The “country discount” affecting South African wines was mentioned by Christian Eedes in his review of Château Cheval Blanc 2015 versus – surely not too strong a word – two vintages of that oddly named local cabernet franc that has been offered at R5000 per bottle. (I say offered, as I do wonder if its been selling at that price – though I trust that those who write in angrily to this website in defence of high prices for Cape wine have supportively bought a few bottles. Strangely, perhaps, I can’t see it on the lists of Greg Sherwood’s Handford Wines or Roland Peens’s Wine Cellar.)

I don’t know how to pronounce the name of this cab franc, though I can reluctantly cope with the lower-case T and the eccentric flourish of punctuation – should “the.” be stressed and spoken as “thee”? – but the concept of a “country discount” is worth considering further. I certainly agree it exists, generally to the disbenefit of South Africa vis-à-vis a number of regions and countries – though there are few areas anywhere that aren’t “discounted” to some degree with regard to Bordeaux, Burgundy and Champagne especially. And probably in Uruguay and India there are producers envious of the growing reputation, and prices, of South African wine and maybe even consider it a touch unfair. (Just guessing, there!)

Christian didn’t report on other reactions to the Cheval Blanc–the. comparison (my computer is understandably confused by the lack of a capital letter after the name of the local wine!), but, judging by the very close scores he gave the Cheval Blanc and the. 2014, he’s presumably convinced by the unfairness of the country discount thing in this case – though the notes might suggest something a bit different from the scores. And given that Christian over the past year gave more than 30 local wines higher ratings than Cheval Blanc 2015 (which has, as he says, received extremely high scores internationally), that presumption must be reinforced.

As I said earlier, I would agree that there is a discount widely operating to South Africa’s disbenefit, though I’d suggest that South Africa has fought its way, through merit, to being on the winning side in chenin blanc. Leaving aside the Loire (though even there comparatively few dry wines compete for price with top South African chenin, surely), I’d guess that California, New Zealand and Australia, for example, might grumpily feel their chenins to be on the whole discounted compared to the Cape’s.

If even that limited example is valid, it does suggest that an element of rationality is involved in at least some premiums and discounts. Consider Cheval Blanc again. I have been luckier in my experience with both youthful and mature examples of this wine than with most Bordeaux at its exalted level. I particularly recall bottles of 1970 and 1966 drunk a dozen years back, which made it clear that one of the reasons Cheval Blanc commands the prices it does is because it has the ability to develop magnificently for decades. Which means, apart from hedonistic values, that if it is well stored it can change hands at auction many times, making profits for its various owners (as well as the auction houses, of course) along the way. The market, rarity and hype takes care of the rest, and blind tasting challenges are not going to be of significant help.

Kanonkop Paul Sauer is an example of a South African Bordeaux-style wine that is a genuinely splendid bargain in international terms, and one can claim that because it has shown its pedigree and its quality time and time again, in both youthful and mature forms, and not just in pop-up blind tastings. It’s not a claim that I would feel confident about making for many current local Bordeaux-variety labels – certainly not ones that haven’t proved their ability to not only last three decades but to improve over that time. (It’s notable that the. cab franc hasn’t even got consistency of origin for the mere two years of its commercial existence.) There are, I confess, not many local red Bordeaux-style bottles that I would turn to, away from the more modest depths of Bordeaux itself, if I had R500 or R1000 to spend.

I’m more convinced about lesser degrees of discounting than with the likes of Bordeaux and Burgundy – with, rather, Australia and New Zealand, say. And we should also remember that regional discounts arguably play a role within South Africa itself. Breede River Valley producers have often claimed that wines from “over the mountain” stand no chance of getting the prices or scores achieved by Stellenbosch wines, whatever their quality. However, the Swartland has shown over recent decades, again by merit, that this regional discounting can be challenged; and the cooler climates of Hemel-en-Aarde and Elgin, accompanied by ambitious viticulture winemaking, have made those areas second to none for, especially, chardonnay and pinot noir.

One can well speak of prejudice in these matters, and it’s unfortunate where true – but we should note that “discounting” is often the result of substantial experience. And time is needed (more on the international than local scale) to properly challenge established judgements and to prove that it’s time for them to be abandoned. When more modern Cape reds can show convincing track records of improvement in bottle over two or three decades, I reckon discounts will be, at least, greatly reduced.