Summer made a tentative return to the Western Cape last week (though as I write it is dull and cloudy again, albeit warm enough), sufficiently for me to resume my quest for good value, cheapish foreign whites at the supermarkets. Not Pick n Pay, which is pretty pathetic when it comes to foreign stuff, and the Constantia Woolworths has a surprisingly small wine section – with one Italian pinot grigio unenterprisingly representing Europe’s whites. 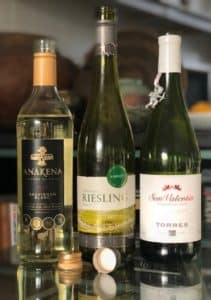 So, to Checkers once more, but it proved difficult to find three I wanted. A German Riesling was a must-try, and a reader had recommended the Chilean sauvignon blanc so I gritted my teeth and took that. But the white Côtes-du-Rhône was vintage 2015 and the colour was showing very developed through the clear bottle, so I suspected it was well past its best, so no. There was an Australian sauvignon blanc, but one was enough (of all things, why have two sauvignons in your small collection of foreign wines in South Africa?). And another bloody Italian pinot grigio, at which I baulked, full of prejudice (well, post-judice really).

I thought it was perhaps the gloom inflicted on the shelves by load-shedding that made my quest difficult, but a return visit the next day confirmed the paucity of choice. So, bearing in mind how well red grenache has been doing in my supermarket forays, I abandoned whites and got a Spanish one of those – Garnacha on the label, which it should be on all labels if there were justice in the variety-naming world, seeing that it’s a Spanish and not a French grape. (On the note of successful grenaches: following the advice given in a comment when I’d praised Woolworth’s version from Ken Forrester, and the enthusiasm for grenache from another reader, I bought myself a bottle of the Marras Grenache, also from  Woolworths, which I enjoyed even more; am yet to find the non-Woolworths Marras bottling, but firmly intend to do so.)

Anakena Sauvignon Blanc 2017 (like the Australian Cab-Shiraz I wrote about last week) has travelled an enormous distance to get here, being produced in Chile and bottled in the UK. Talk about carbon footprints…. Typically fresh and juicy, well balanced and not too acidic, it’s got a nice earthy note and is more cape-gooseberryish than a local is likely to be, so it offers a pleasant change, I’d have thought – and at a mere R50 seems good value to me.

The Moselgarten Riesling Kabinett 2016 is to me greatly more interesting and even better value – a great grape from a great address (the Mosel) at a mere R60. It does what only riesling Kabinett can do: offer both charming, elegant delicacy and depth, fully satisfying at a mere 8% alcohol. There’s an obvious sweet touch – and also a bit of green bite from the early-picked grapes – but effectively it’s pretty dry, given a good acidity. The peachy, citrus fruit has already faded a little and a hint of petrol come in – but I like that too. It proved a perfect partner to my dinner of hot and spicy-savoury tofu, Asian-inspired via Ottolenghi. This was the only bottle at my branch of Checkers but if I can find more, I’ll buy a caseload. (I even feel a bit resentful at sharing the news.)

It was quite a leap of aromas and flavours and structures moving from northern Europe cool-climate refinement to the generous, sensual richness of Torres San Valentin Garnacha 2016. The bottle doesn’t give an origin more precise than “Spain”, but the Torres website says Catalunya (Catalonia), and also suggests that there might be some admixture of other varieties. It’s a very pleasant wine, with a nice little grip of ripe tannin and sufficient acidity; some warmth from the declared 14% alcohol. No real fruit depth, but totally satisfactory and recommendable – though only after spending the same sort of money on the Marras (and Ken Forrester) versions, which I think I’ll stick to.

But I have convincingly made the discovery that no doubt many readers have arrived at long before I got round to it: In a situation of drought, Checkers (with the selection advice of Michael Fridjhon) really is doing local imbibers a great service through its range of modest foreign wines, judging by what I’ve tasted. I intend to explore more – and I wish some of our grander importers would do likewise and start doing a bit of searching rather than relying on the established names, so as to bring us more wines of this quality at this sort of price. Because they’re not doing so now.