The most annoying thing about discussions of “natural wine” is that you have to spend such a lot of preliminary time establishing what exactly it is that you’re talking about. Or agreeing to differ. The easiest confusion is with “naturally made wine”, I suppose (which we could take to be minimal intervention: spontaneous fermentation, no additives, nothing stripped out, no fining or filtering). That would be the same thing, bar the crucial difference that the grapes need not be organically grown, which they should be for any sensibly defined “natural wine”. Added sulphur? As long as it is low. Arguably. Different definitions obtain.

As far as I’m aware, lightness of alcohol doesn’t come into most definitions or understandings of naturally made wine, but the association of lightness is frequently there. And once it becomes extreme (plunging well under 12%, say), I start getting jittery: sometimes it works, but often the lack of vinosity, of texture, of depth, of flavours that come only with fruit ripeness, makes it err on the insipid side, however much one can plead freshness as compensation. (Much as big, bold intense wines can err at the other end of the spectrum, where sometimes 14.5-15% alcohol can work and be balanced, sometimes not; however much one can plead intensity as compensation in this case.) 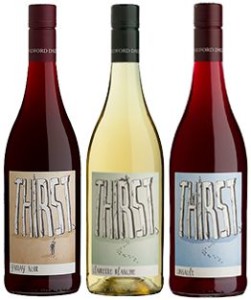 Radford Dale, the fine négociant Stellenbosch producer, works pretty much the gamut of natural wine-making in its very large range. Just about everything is minimalistically, unmanipulatedly made (by Jacques de Klerk), and the vineyard work that they are involved with tends (I’d guess to varying degrees) to some extent in the direction of organic. But I think only the Radford Dale Nudity Syrah meets all requirements of “natural wine” (including no sulphur addition).

The three Thirst wines in the Radford Dale “Natural Selection” are, the producer claims “refreshing, lower alcohol, lower sulphur, naturally-made wines, with minimal intervention” – and I won’t quarrel with any of that. But my jitteriness about low alcohol does start coming into play. I’ve recently had a bottle of each of the 2019s – that is, I polished off one of the bottles with pleasure, drank two thirds of another, and one third of the last one. (Not on the same occasion, you understand – the alcohols are not quite low enough for easily achieving such imbibing heroics.)

For the Clairette Blanche, Jacques had to find a new vineyard, as the one previously used by them (and the Cravens) was no longer available. It’s a tricky grape to make an interesting wine from, as it is so neutral, and I found the 2019, declaring 12% alcohol, less delightful than the previous. A pleasant lemony tartness, a bit of flavour (though I’m damned if I can be more specific than that). But I didn’t want to waste drinking time and capacity on it.

Gamay Noir is a rare wine in the Cape and in recent years the two examples from Radford Dale (the other called Antidote, a little more generous than the Thirst) have been alone;  but they are now joined by a 2018 old-vine version from Villiera (untasted by me). I described the 2018 Thirst Gamay as “fresh, undoubtedly, and light at 10.5% alcohol, with a nice bit of fruity perfume – but … rather insipid and lacking vinosity and deliciousness”. The 2019, made with a smaller percentage of stems, has a similar alcohol level, and is undoubtedly more charming and less trivial, with more fruit flavour apparent and nicely dry – but it is still a very light, simple drink.

The one of the trio that I most enjoyed was the Cinsault. Tellingly, it has 12.5% alcohol (so the grapes must have been just about ripe!), giving it, compared to the Gamay, more generosity on aroma and flavour, more flavour depth and textural softness, a welcome touch of the warm vinosity absent from the other red. There’s acidity and freshness, but all in balance.

The wines are all around R155 per bottle, which I can’t pretend I think to be good value. Perhaps some people will like the clear glass bottles (screwcapped like all the Radford Dale wines), and the pale labels. And undoubtedly some will value the lightness more that I do, and accept the losses entailed.