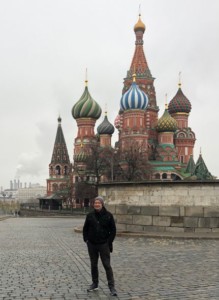 In 2018, Russia was in eighth place in the league table of importers of South African wine – a little behind comparatively tiny Sweden, and substantially ahead of another big country, the USA, in ninth place. Significantly, though, it was in fifth place when it came to bulk: Russia imports a disproportionate volume of bulk rather than packaged Cape wines. When Cathy van Zyl and I were invited to travel to Moscow to talk about South African wines to a masterclass of sommeliers, we were indeed told that a too pervasive image of South Africa is that of a producer of lower-end stuff – an image that we were invited to challenge.

Which we happily did, last week, in vibrant, beautiful, cold Moscow. We took some extra days as tourists there, by the way and had a wonderful time in the huge, car-filled city (imagine Adderley Street in Cape Town as one of many teeming eight-lane roadways, despite a brilliant public transport system – which a Capetonian couldn’t even begin to imagine, as with the city’s impeccable cleanliness). Some excellent, interesting food – not too expensive, but the wine is pricey, not just in restaurants but generally: I compared international labels I know, and got the impression that they were unusually expensive here.

The all-day class that Cathy and I gave was part of an excellent series of “academies” directed primarily at sommeliers, organised – and sponsored – by the large Fort import and distribution company, with the charming and efficient Daria Sologub as the prime realiser of the event (Daria also took us to a magnificent Russian lunch at a fine Moscow restaurant, Dr Zhivago.) I forgot to count, but there were some 40-plus tasters in attendance – mostly if not all sommeliers, primarily from Moscow.

Wines for the event were partly drawn from the comparatively small selection of top-end producers with stocks already in Russia, and partly from wines especially brought in, Cathy and I ensuring that there was a reasonable spread of styles. Intricate Russian bureaucracy means that it is exhaustingly difficult importing samples for a tasting like this, so Cathy and I (as well as a few Russians travelling back from South Africa) carried bottles in our luggage. Some countries eagerly provide consular assistance in facilitating these masterclasses – but, predictably, not dear South Africa: the embassy in Moscow didn’t even bother to respond to letters from the organisers. And WOSA wasn’t able to help, unfortunately.

The point about Russian bureaucracy became abundantly clear to me at Domodedovo airport when I went to the Red Channel to declare my 12 bottles of fine wine (from Trizanne Signature Wines, Fable, Reyneke and A.A. Badenhorst). The reaction of the official was a bit like that of the beadle when Oliver Twist asked for a second helping: no way could I bring in more than the standard three litres – though with paperwork and payment perhaps, just perhaps, five litres would be possible. However, over two hours later, after the dedicated work of a few Customs officials, after my signing at least 20 scary declarations and paying over a modest amount, I was allowed out into the frosty darkness of late-afternoon Moscow, clutching all twelve bottles. Cathy, on the other hand, attempting to declare her bottles at the different airport she arrived at from London, was airily waved through the Green Channel….

So we had a full complement of (I think!) 28 wines, all of which Cathy and I were happy to introduce. We began with a welcoming sip of Simonsig Cuvée Royale MCC 2014 and ended with a farewell toast of Klein Constantia Vin de Constance, also 2014. In between, apart from the producers mentioned above, were examples from Leeuwenkuil, Meerlust, Remhoogte, Raats, Warwick, Sadie, Mullineux, Ken Forrester, Craven, Boekenhoutskloof, Alheit, Bosman, David & Nadia, Thorne & Daughters, Paul Cluver, Crystallum, Sijnn, Keermont and Porseleinberg.

All went well, I think. Cathy gave a general overview of the South African industry, explaining the Wine of Origin system, the different areas, terroir considerations, etc. I spoke about the history of South African wine, especially about the post-1994 revolution in quality and approach. The audience seemed interested and asked intelligent, sometimes difficult questions – always a good sign, and I think they appreciated the wines.

Three different sommeliers came up to Cathy or me afterwards and spoke about small-group wine tours they were planning for the Cape. If you bump into any of them, please be nice and helpful! Clearly the appreciation of the fine end of Cape wine is growing in Russia; it would be good to further advance this growth.