Who’d have thought it (apart from the very well informed, of course)? First, that there is a small but significant wine industry in Japan; second, that it produces some really good and attractive wines. I shifted last week from near-total ignorance on the subject to, well, one step up from there, and thoroughly enjoyed the move. Let me encourage any other wine lovers ignorant about Japan to make the shift also – if you get the opportunity, which is not really easy anywhere outside the home country, I’d guess, and generally impossible in South Africa.

Eben Sadie had learnt more about Japanese wine on his marketing trips there, and had brought back more than enough bottles to generously put on a tasting in Cape Town, “to share some of these wines of a country busy forging a new dynamic in the world of wine”. So a small group of us met at the Japanese-oriented restaurant Kyoto Gardens (and had a superb meal there afterwards) – including a few relevant Stellenbosch academics, media people, Eben’s Japanese importer (who is based in Cape Town, and seems to be primarily responsible for serious wines going to Japan), and the Japanese Ambassador to South Africa. 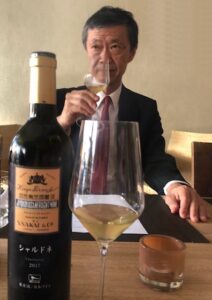 The Ambassador, Norio Maruyama, is, as the photo might suggest, a deeply committed wine lover – “a geek”, says Eben – and was able to give much useful information on the vinous and cultural background of Japanese wines. (Incidentally, he removed his jacket and then his tie, as the evening went on and warmed up.) At one stage I asked him if 2016 was a good vintage in Japan. There are no good vintages in Japan, he said – they’re all consistently bad. By which he didn’t at all mean that they don’t produce good wine, but that the struggle to do so must be waged continuously.

Clearly, Japan shouldn’t really be producing wine at all. Although it’s approximately on the latitude of the south of France, like the east coast of America it has a vast continent to the west, which means that the weather is consistently pretty terrible for winemaking. If it is the land of the rising sun, it seems the sun is often obscured by rain or snow clouds and violent weather. Eben says that seeing Japanese conditions makes him realise that South African winemakers should never complain – though whether he always remembers that himself is another matter. With their making wine against these odds, I suspect the Japanese must be a more romantic people than they’re sometimes given credit for.

But the meticulous care, the pride in craftsmanship, the delicacy and refinement that are so associated with classic Japanese culture are – on this showing anyway – also part of Japanese wine. These eight examples were all pretty low alcohol-level and with good acidity, as might be expected from cool origins, and the subtlety, elegance and delicacy that is possible within those parameters was certainly on offer.

Japan has two signature wine-grapes. It is thought, the Ambassador says, that koshu came originally, many centuries back, from Georgia. It has a pale red skin, but this didn’t at all tint the one that opened our tasting – a 2018 from Grace Winery in Yamanashi (the most important viticultural area in Japan, just inland from Tokyo, though here as elsewhere there is more growing of table grapes). Both serious and charming, pure, fresh and delicately grippy though not high in acid, it happily set the tone for the evening. We then had two chardonnays, with the effectively oaked Kumamoto 2017, from southerly Oita, particularly fine – I reckon it could stand unapologetically amongst wines from the best-known chardonnay areas in the world. The other white, from the German crossing kerner (it’s a few decades since that grape disappeared from the Cape), was also attractive, quite serious and immensely drinkable, but with less inherent quality.

The reds started with a pinot, which was the closest to a disappointment we came. Ambassador Maruyami diplomatically regretted that we probably wouldn’t find better Japanese examples – but the curve is rising for pinot too, he feels. Then we had two good examples of the other Japanese signature, a hybrid of Labrusca Bailey and Muscat of Hambourg, called Muscat Bailey A, bred especially in the earlier twentieth century to cope with the humid conditions. (The Japanese are apparently so accustomed to the name that they perhaps don’t realise how odd it might sound to others.)  Hybrids don’t often have a good reputation, but this one seems particularly successful, and is the country’s most planted red grape, giving wines that are silky and fruity and distinctive, with an unimposing, aromatic charm. The 2016 from Adega Vinicola d’Aruga was the less expensive of the two we had, but I think most of us thought it the superior – a gorgeously delightful wine, with lovely fruit expression, the usual good integrated acidity giving the basis for its elegance.

That mention of price prompts me to say that the wines were not as pricey as I would have expected from an expensive, nationally proud, rich country with limited wine production. The only prices we had were in yen, of course – but I did gather that, in Japan, one could buy a good few bottles of most of these for the price of one bottle of Columella (as should be the case, obviously!).

The grandest of the reds was, undoubtedly, another from Grace Winery: Cabernet Franc 2016, apparently the first wine that took Eben’s attention in Japan. Typical varietal aromas, with dry leaf and berries, fresh, beautifully balanced and, once again, delicately elegant, though this time not without some force. I’d be only too delighted to have a few bottles of that in my modest cellar.

So much for the fascinating experience of my first Japanese wine tasting. I must diverge to conclude. For our restaurateur brought us a little bottle of a truly splendid Japanese liqueur gin (Kyoto Distillery’s Ki No Bi, at 54.5% alcohol!). Japan is, of course, famous for its whiskies. I’m realising that this complex, multi-island nation is altogether pretty good at quite a range of alcoholic beverages. Seems a bit unfair – though I dare say there’s a connection – when they’re so damned good at food too.