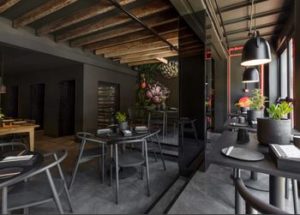 Anna Trapido remarked in her review of Epicure that “In recent years South African diners have become accustomed to parsimonious restaurant wine lists. Two-page affairs with limited choice and little information beyond price are now the norm.” Two pages would allow very wide spacing for the winelist at the smart restaurant I went to in Cape Town earlier this week – Janse & Co on Kloof Street. There are just 35 wines: 11 white, 2 pink, 16 reds, 3 sparkling. All local, the mark-ups not outrageous, all current releases; at least the vintages are given, which is, unfortunately, far from the rule. It’s a decent range of wines, though you’d have thought that they could have found space for a chenin, given its status in contemporary Cape wine. But in terms of size, unimpressive for a fairly expensive restaurant. The glassware is very good, I should add; and the waitress offered to decant my wine (and then had to do so as the cork broke when she was opening it – but that can easily happen, I suppose).

Corkage? Well, there’s a little story. Having checked on the website that I was allowed to bring a bottle, and noted the fee of R100 (maximum one bottle per four people), I took along a wine that I felt honoured to drink – one that some restaurants might even be flattered to welcome: Duhart-Milon Pauillac 2005 (it proved excellent, approaching its prime).

When I put it on the table I was promptly warned that the corkage was going to be R250. Huh? I pointed out what was quoted on the website. Oh, the man said (manager or maitre-d’, perhaps), the rate was changed today. I murmured something, as you might imagine, and he agreed gracefully enough that the restaurant would honour the advertised charge.

As a matter of fact the website is still, three days later, advertising a corkage charge of R100. Was the man mistaken? Ignorant? Making it up as he went along?  Wouldn’t you anyway have thought that R100 is enough to charge, when you’re offering diners a miserably small selection of current-release wines?

The food, incidentally, was imaginative and good. The rather small helpings (somewhere between a standard starter and a standard main course, I’d say) meant that the waitress was not being unreasonable when she suggested we might well want to have four or five courses – the minimum order is three (R385) going up to seven (R785). Beautifully plated they were, though it’s not easy to eat bitty food with a knife and fork when it’s lurking at the bottom of a fairly deep bowl – but, gleaming down there, it looked fantastic. And the restaurant itself is very designer-chic and handsome: mostly done in matt black, with artful lighting. As it was not too cold, I won’t complain about the blast of evening wind that hit me in the back every time someone opened the door to the patio when going for a smoke or whatever. Every restaurant has a problematic table or two – unless, of course, the designer also takes mundane things like that into as much account as the decorative impact of the lighting.

For my second restaurant experience of the last week I move from inner-city chic to easy-going suburbia; well into my comfort zone and a familiar, regular pleasure: A Tavola in Claremont. A wide range of good Italian trattoria food, invariably flavourful and well cooked (the pasta a teeny bit past al dente, but that’s what most locals want, apparently) – not exactly exquisite, but it’s not meant to be, and the prices are moderate (thus endearing itself to us Capetonian southern-suburbanites, who generally don’t like paying much for dining out). Most of the excellent waiting staff have been there for many years – great testimony to various things I approve of.

If the winelist at A Tavola had been at Janse & Co, I’d have been impressed. It’s not vast – Anna’s two pages (two columns per page) would accommodate it. But it’s a list of interesting, excellently chosen wines, the work of one of the owners, David Haupt, who’s often to be seen at wine-tastings and knows well what he’s doing. Plenty available by the glass; and there’s a good selection of foreign stuff (mostly Italian) – affordable enough to tempt and reward a mildly adventurous suburbanite. There are a few older vintages (unfortunately not all the vintages are given on the list). Markups are modest, especially for the foreign selection and the “Cellar Selection” – where else in Cape Town will you find Alheit Cartology 2015 for R425, or Beaumont Hope Marguerite 2015 for R395? That’s ridiculously cheap (check the retail). Oh, and the corkage is soon to go up to R70 per bottle, and there’s never the slightest attempt to make customers feel there’s a problem in bringing their own bottles.

It’s almost as though A Tavola want to encourage diners to have a great experience including wine, and that they think they should be making profit from food rather than drink. Weird, perhaps – but I wish others could be lured into similar oddities. I also wish that more would acknowledge that, if you’re not storing wine for more than a short period, and only stocking current releases, there is no excuse to not have a decent choice available at reasonable prices.