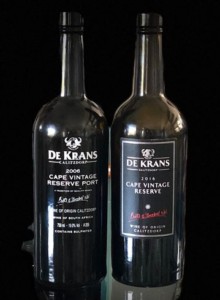 The Cape autumn remains worryingly beautiful (just a little rain last week), but the nights are that little bit cooler. On Saturday I made my first fire of the season – and opened my first port. Two of them, in fact, as it seemed a good idea to compare De Krans Cape Vintage Reserve 2006 with the current release, 2016, to see what a decade of maturation has done for the wines.

One could start a comparison by looking at the bottles and play “spot the difference”. The 2006 is printed in white directly onto the bottle – alluding to traditional Portuguese practice and lending it, to my eye, a most appealing unpretentious element of countrified authenticity. By now, though, Boets and Stroebel Nel of De Krans have introduced a paper label, and a back-label too, continuing, I suppose the process of conventionalising which began with the renaming of the brand in 2002 from Die Krans to De Krans, presumably in deference to non-Afrikaans-speakers’ confusion over the meaning and pronunciation of “Die” in this context. (Though I dare say that most international customers are still ignorant about what a krans is – a cliff-face or crag, I can tell any of them that might be reading this). “Wine of Origin Calitzdorp” remains proudly displayed on both bottles.

The most important packaging difference, though, is the dropping of the word “Port”, in line with the agreement between South Africa and the EU. That change was rather charmingly announced by De Krans with the valedictory 2010 vintage, the wine labelled The Last Cape Vintage Reserve Port, the visually outstanding words being “The last port”.

Nor are the wines identical in make-up. There’s a preponderance of tinta barocca in the older wine (50% with 38% touriga nacional, plus souzão and tinta roriz), while the 2016 is overwhelmingly from the rather more renowned touriga (78% plus the tintas). The analyses are almost identical however, and the Klein Karoo vintages in both years were good enough to produce a Reserve wine.

That all said, what about the rather more important differences in the contents of the bottles? The colour, of course. Both are deep and opaque, but the youthful purple of 06 has radically transmuted to dark ruby. The effect of bottle age shows in less obvious chocolate, spice and, especially dark pruney fruit on the 06, which is correspondingly more savoury and interesting, with a background note of spearmint I rather like.

With a tannic, powerful wine like a bottle-aged port, structural change is of equal importance to development of tertiary characters, and here it is happening predictably: the older wine is still warmingly gorgeous, but has the refinement that comes to a fine wine with some age, with the decade in bottle taming the fiery power and smoothing the tannins, making for a more integrated whole. Though not a whole lot, really – there’s still room for positive development.

Undoubtedly it is worth keeping a serious, fine quality fortified wine like the De Krans Vintage Reserve (the other styles made, the Ruby and even the straight Vintage, are fine for earlier drinking, as is the splendid cask-aged Tawny). In summary answer to my question about what a decade has done for the Reserve, I must ruefully admit that I shouldn’t really have opened either bottle – certainly not the 2016, delicious though it is. The 2006 was certainly better for its wait in the cool darkness, but I think another five or ten years will only add layers to its flavours and further enhance its harmony.

I suspect that the 2016 has an even longer total lifespan, with a greater depth and intensity compared to what I remember of the 06 at this early stage. Its price of R325 per bottle is modest in relation to its quality – but, then, fortified wines are not fashionable. What else, though, can enliven and give warmth to winter evenings with quite such a combination of power and grace?