Why Stellenbosch Cabernet Sauvignon will always be a sure bet

Consider such fine examples of Syrah as of Boschkloof Epilogue, the Mullineux Single Terroir wines, Porseleinberg and Rall Ava, and it’s difficult to deny that this is the most exciting red wine category in the country right now. That said, you’d be mad to think that deluxe Cabernet Sauvignon is simply going to disappear off the scene.

In this regard, what’s happening in the South African national vineyard at a macro level is insightful. According to South African Wine Industry Information and Systems (SAWIS), total hectares for 2019 stood at 92 067ha, down 9 192 ha from 2009, equivalent to 9.1% decrease. There are 109 different varieties planted of which the top 10 (Chenin Blanc, Colombar, Cabernet Sauvignon, Sauvignon Blanc, Shiraz, Chardonnay, Pinotage, Merlot, Ruby Cabernet and Cinsault in that order) make up 85.8%.

Of the top 10, only Sauvignon Blanc and Pinotage are more widely planted than they were a decade ago. Cab has decreased by 19.1% over the period in question to 10 087ha and yet it remains the most widely planted red variety overall (second-place Shiraz/Syrah fell by 8.3% to 9 178ha). 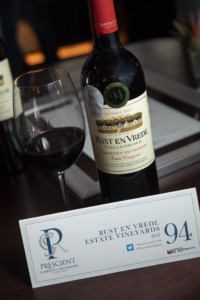 Here’s where things get interesting: No other district has a greater proportion of red to white grape varieties than Stellenbosch, this being 62% relative to 38% and no other district has more Cab planted, total area being 2 995ha or 29.7% of the national whole (Paarl comes in second with 22.7% and Swartland third with 17.3%).

To many, intensively farmed Stellenbosch remains the wine capital of South Africa and Cabernet is most definitely its calling card. It’s a moot point whether straight Cab or Cape Bordeaux Red Blends (Cab in some combination with the other four Bordeaux varieties) are more successful (see Tim James’s article in this regard here) and those producers who make both a straight Cab as well as a blend are usually inclined to position the latter above the former in price but regardless of this, I’m inclined to think that Cabernet plantings have fallen too much relative to market demand.

Mere speculation or is this born out in reality? According to a reliable source, Stellenbosch Cab has recently undergone a significant and fast increase in price achieved, moving from an average of R4 952.63 per ton in 2014 to R8 638,79 in 2019 – nearly 40% of it last year selling for over R10 000 per ton. You can be pretty sure the new US-based owners of Warwick and what used to be Uitkyk won’t be planting anything too exotic, nor the French owners of Cordoba nor the German owners of Ernie Els Wines…

Cabernet Sauvignon succeeds because it maintains a recognizable style and character wherever it is transplanted and not for nothing is it the most widely occuring red variety in the world. Moreover, Cab is seen as investible by punters – it is associated with Bordeaux on the one hand and Napa Valley on the other, the best of these regions producing wines with a proven ability to show price growth over time, far more so than what comes out of the Rhône, the traditional home of Syrah. As such, the disappearance of Stellenbosch Cabernet Sauvignon from the world of fine wine is pretty much inconceivable.