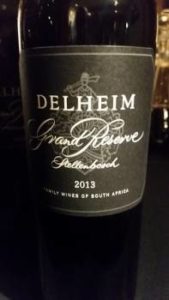 Start of a new chapter.

The maiden vintage1981 Grande Reserve from Stellenbosch property Delheim was conceived in order to set a new standard for South African reds. Cabernet Sauvignon always dominates but small portions of the other Bordeaux varieties have been included in some vintages.

In recent times, Delheim has undergone a change of regime with winemaker Reg Holder and viticulturist Etienne Terblanche both joining in 2012 and no Grande Reserve from 2009 to 2012 was released. “We’ve been struggling with leaf roll virus,” says Terblanche.

The Cab for the 2013 comes off the Vera Cruz property closer to Klapmuts acquired in 1970s to supplement Delheim’s own plantings. Age of vineyards vary but some are well over 30 years old now. The vineyards are untrellised which is unusual for the variety but because of the more open canopies, use more water and therefore obtain moderate stress earlier in the season. Berries are also smaller giving better flavour.

How does the 2013 stack up? Entirely from Cab, Holder has extended maceration to 21 days and pushed back oak influence, the wine matured for 17 months in 300-litre barrels, 31% new.

On the nose, red and black currant plus a definite herbal, even minty character. The palate is medium bodied with luscious fruit, moderate acidity and very fine tannins. Not dark and brooding like many Stellenbosch Cabs; on the contrary, quite new wave in how fruit driven it is. Price: R285 a bottle.

Delheim has launched its first single-variety Cabernet Franc, named Vaaldraai after the vineyard which supplied the grapes and very nicely judged it is, too. Matured for nine months in 6...

The Sperling family of Delheim in Stellenbosch have announced the passing of Michael Hans ‘Spatz’ Sperling earlier this morning at the age of 87. Sperling arrived in South Africa as...