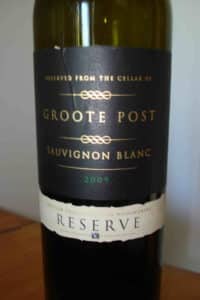 Do you get the top note of gooseberry on this wine?

“Freshly cut grass, straw, asparagus and gooseberry, typical of climatic conditions in Darling. This wine spent 3 months on the lees to maximize freshness,” informs the back label of the Groote Post Woolworths Reserve Sauvignon Blanc 2009, and while I related to the grass and asparagus, the description of “gooseberries” did not evoke very much for me.

It made me think that while gooseberries as a way of alluding to the aroma and flavour of Sauvignon Blanc has become conventional, I’ve never found it that useful. Fearful that I was missing out on a key analytical tool all this time, I rushed to the fridge and extracted an in-season gooseberry, halved it with a knife, and sniffed deeply. No smell of any real significance, as far as I could tell.

I have to confess that I find tasting notes which are laden with descriptors difficult to generate myself (when does a strawberry stop being a strawberry and become a raspberry, for instance?) and not terribly useful when generated by others (due to the ultimate impossibility of common sensory experience).

We obviously do need some sort of language to speak about wine otherwise it would be impossible to understand or learn anything about it. Wines depicted in terms of other aromas and tastes whether they be animal, vegetable or mineral can be useful when applied sensitively but I think it is far more worthwhile to talk about issues of balance and structure, intensity of flavour and complexity. In that respect, I would describe the Groote Post Woolworths Reserve Sauvignon Blanc 2009 as rich and broad on the palate with huge flavour intensity but balanced by bright acidity. A sumptuous wine that is starting to display some secondary character, suited to food rather than being drunk as an aperitif. Very good but perhaps too weighty and therefore tiring to drink to be considered excellent.

As UK wine writer Andrew Jefford says in a great article I stumbled across on his blog called “Wine and Words”, the trick is to “tell [the reader] about the particular way a wine is a wine”. The concern is always that you become too fanciful but as Jefford says, “Don’t be afraid of being called pretentious: that’s just a term humourless philistines use to compensate for their own imaginative inadequacies.”

Leave a Reply to Peter F May Cancel reply

What kind of wine shopping habits do users of this site have? Here’s what you told us in our recently completed online survey: Supermarkets Asked which supermarket chain has the...

Darling producer Groote Post have released a new red blend from the 2015 vintage under the label Salt of the Earth, comprising of 66% Shiraz and 34% Cinsault, the latter...

A visit to Weingut LacknerTinnacher

Judging for this year's Concours Mondial du Sauvignon is taking place in Styria, Austria. Yesterday a visit to LacknerTinnacher outside the village of Gamlitz for a tasting of some of...