Friday saw 11 older Cape Winemakers Guild Auction Wines presented at Jordan Winery Restaurant in Stellenbosch. It was to be an investigation of the age-worthiness of South African wine, a topic that attracts its fair share of controversy. I am inclined to think that when it comes to modern South African reds in particular, these are better drunk sooner rather than later, an opinion informed, at least in part, by WINE magazine’s annual review of reds 10 years after vintage where the majority do not seem to mature with benefit.

The wines were as follows : 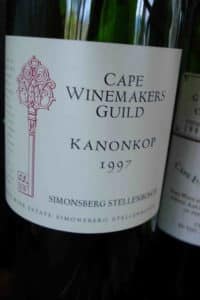 Some general observations: It is sometimes argued that the South African winelands are situated too close to the equator for vintage variation to be a significant factor in determining quality. This is clearly mistaken as a comparison of wines from the difficult 2002 (over-developed and out of balance) against those from the sublime 2003 (youthful and still gaining in complexity) shows. Which vintages are going to perform best is not always an easy call to make: early on warm 1998 was preferred to cool, wet 1997 when it came to Stellenbosch reds, but now the 1997s are looking much less tired.

Lastly, there really are no absolutes when it comes to wine. Two wines in the line-up that are not only surviving with age but are coming more complex and refined were the Le Riche Auction Reserve Cabernet Sauvignon 2003 and the Kanonkop 1997. 5 Stars, 18 points or more on the 20-point scale, 96 points or more on the 100-point scale, use whatever rating system you like. Moreover, while being of superlative quality, each remained true to its place of origin: Stellenbosch (and perhaps to their originators, Beyers Truter in the case of the Kanonkop and Etienne Le Riche is the case of the Le Riche).

Fired with enthusiasm, fellow tasting attendee and wine entrepreneur Jörg Pfuetzner and I decided it was time for the Judgement of Cape Town à la the 1976 Judgement of Paris which saw the wines of  California trump  those France and a consequent reassessment of what the Yanks were capable of. How does Kanonkop vs. Leovillle Les Cases, Vergelegen White vs. Domaine de Chevalier, Boekenhoutskloof Syrah vs. Chapoutier La Mordorée sound? It’s long overdue that SA’s best got the recognition they deserve.

The 2017 vintage is much acclaimed when it comes to Stellenbosch red wines but what of 2018? De Trafford in Stellenbosch describes it as “another excellent vintage to follow 2017...