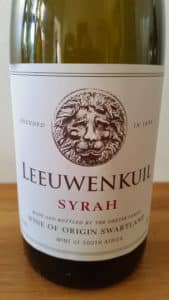 Selling for R275 a bottle, Leeuwenkuil Heritage Syrah 2012 was Wine Cellar director Roland Peens’s top wine of 2014 which is quite an endorsement (read more here).

What makes it special? Grapes come from a vineyard on schist soils on the southern slopes of Riebeek Mountain where Boekenhoutskloof, Mullineux-Leeu and Rupert are all apparently investing with Rudiger Gretschel, who’s head winemaker for Vinimark and has been instrumental in Reyneke’s rise to prominence, overseeing production.

Is it a new benchmark? I think it’s more successful than Porseleinberg 2012 for instance on account of being less attenuated (it has a back-label abv of 14% compared to Porseleinberg’s 13.5%) but I’m not sure it’s a game-changer.

There are no obvious shortcomings but it does have whole-bunch ferment written all over it. Clever whole-bunch but whole-bunch nevertheless and Swartland winemakers may contend that they’re going this route for greater perfume and silkier tannins but basically the realisation has dawned that the Swartland is quite hot and whole-bunch gives their reds the impression of freshness that they otherwise wouldn’t have. Rather whole-bunch character than dead fruit, however.

Wine Business Advisors’ final installment on technology trends in wine delves deeper into NFTs, as part of the third significant internet era. This comes just a decade after the release...

The economics of wine in the Upper Hemel-en-Aarde Valley were discussed at the recent Pinot Noir celebration, which once again was a fantastic event. Low yields, difficult growing conditions and...

While wine has been produced for thousands of years, the industry is now in constant transformation. The environment is of course more controlled and more impacted, with new innovations and...