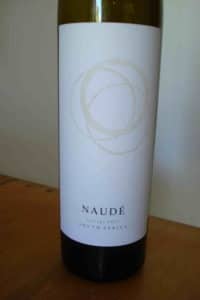 The main aim of a tasting with Ian Naudé of Adoro Wines yesterday was to introduce his sweet Mourvèdre 2009, intended specifically to be served with cheese. The sommelier of a London private club frequented by the “Russian mafia and shieks” and famed for its cheese trolley apparently approached Naudé to come up with a wine that would complement the greatest possible array of cheeses and voila! something that is not as dry and tannic as table wine but not as alcoholic and sweet as Port. Grapes from the Swartland, an abv of 13.5%, a residual sugar of 55g/l and a total acidity of 8g/l. Not hugely profound, but indeed very versatile with a range of cheeses.

The revelation for me, however, was the Naudé White 2007. Though I’ve encountered various vintages of this wine a few times before , I’ve tended to be left unmoved despite many of colleagues viewing  it very favourably (every vintage from maiden 2006 to 2009 has rated 4½ Stars in Platter’s).

It is something of an unusual (but hardly bizarre) blend featuring Chenin Blanc, Sauvignon Blanc and Semillon in various proportions from year to year, with the Chenin and Sem typically being barrel fermented in new oak. I guess that until now I’ve tended to find the wine a little too slight and insubstantial (we looked at 2007 through to 2009 yesterday, and the first two vintages both have an abv of 11.5%, while the 2009 is still low at 12.5%) but yesterday the 2007 seem to have unfurled into something rather special four years on from vintage. A forthcoming nose of citrus, peach and some oak spice. The palate was juicy and concentrated with layers of flavour. Bright acidity lent freshness before a long, dry finish. A complex and stylish offering.

The currently available 2008 sells for R120 a bottle and on the basis of the 2007, is a good twelve months off drinking at its best.  Naudé proudly points out that towards the end of last year Jancis Robinson MW recommended it in an FT Weekend article entitled “Do the White Thing” featuring 75 sure-fire whites and what greater endorsement can you get than that?

Wouldn’t it be great if SA wine could replicate its Chenin Blanc achievements with Colombard? While Chenin Blanc is the country’s most widely planted variety, Colombard is second. Of course,...