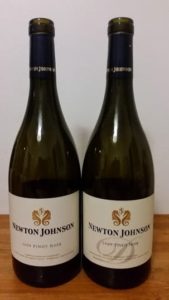 When the Elgin Pinot Noir 2009 from Newton Johnson was reviewed by Angela Lloyd for the 2011 edition of Platter’s, she rated it 4½ Stars while the Domaine Pinot Noir 2009 (from fruit grown on the Upper Hemel-en-Aarde property) was nominated for 5 Stars and subsequently endorsed.

Revisiting them nearly five years on, they’re both in great shape (there’s no doubt that Pinot from the cellar is as good as it gets locally) and which one you prefer will come down to what you prize more in wines from this variety, the Elgin wine showing more purity and the Domaine more complexity of a secondary nature.

Domaine 2009
Matured for 11 months in French oak, 32% new. Red fruit, earth and spice – the nose less primary and arguably more ephemeral than that of its Elgin counterpart. Rich and broad but not short of freshness – seemingly riper than Elgin despite possessing the same abv of 13.5%. The tannins are soft and silky further contributing to the voluptuous character of the wine.

It did strike me that had the wines from Elgin and Hemel-en-Aarde been blended, then the result might have been a super-Pinot but while a multi-regional approach is common with Sauvignon Blanc for example, it seems that is very much not the done thing in the case of this particular variety…

The 2018 vintage of the Syrah Grenache Mourvèdre blend that is Full Stop Rock from Upper Hemel en Aarde property Newton Johnson is as reliable as ever. Very fragrant on...