Rhône blends vs Syrah in SA 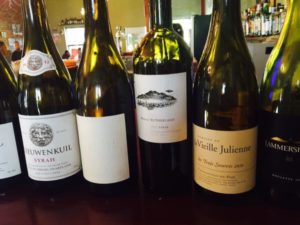 Some of the kit.

How do SA’s Rhône-inspired blends stack up next to straight Shiraz? To make the best wines we possibly can in South Africa, we have to blend. Only in continental climates can mono-varietals make for complete wines – take Pinot Noir in Burgundy Riesling in Germany. As soon as you’re in a warmer Mediterranean or maritime climate, blending becomes essential, or so the thinking goes.

Yesterday a tasting of six examples of single-variety Shiraz and six blends, most of the wines from here but also Syrah from St Joseph and a Châteauneuf-du-Pape to keep everyone present honest.

The line-up was as follows:

My sense was that the day belonged to the single-variety examples of Shiraz. The La Vielle Julienne was very accomplished – red and black fruit, attractive oak, pepper and spice on the nose; big (15% abv on the label) but balanced with succulent fruit and layers of flavour (score: 94/100) – but the SA wine were all a notch or two below the best of the straight Shiraz.

The Lammershoek Roulette 2010 (from Shiraz, Grenache and Carignan) was divisive in that it showed Craig Hawkins’s natural approach to winemaking as much as anything; the Mullineux Kloof Street Rouge 2013 (85% Syrah, 9% Carignan ,2% Mourvedre, 2% Cinsault and 2% Grenache) was likeable but straightforward as you might expect from a wine selling for R95 a bottle; the Fable Night Sky 2011 (60% Syrah, 25% Mourvèdre and 15% Grenache) was big and chunky; the AA Badenhorst Red 2012 was corked and the Columella 2010 (80% Syrah, 17% Mourvèdre and 3% Grenache) was the pick of the bunch showing all the craft and deliberation you’d expect from Eben Sadie.

In contrast, the Leeuwenkuil Heritage Syrah and Porseleinberg were truly riveting wines, both wonderfully aromatic on the nose and showing real depth of flavour on the palate (I confess I was initially guarded in my enthusiasm for these wines but they seem to be getting better and better with time in bottle).

So a tasting that left more questions than answers. Part of the reason that straight Syrah is proving so successful right now is that the vineyards are more established than those featuring the alternative Rhône varieties but I still think punters are entitled to expect more from the sub-category that is blends.

The ageability of Cape syrah, especially of the much-lauded new wave examples from Swartland and Stellenbosch, has been a slightly troubling concern for me for a while. A few weeks...

Due to the complex interplay of both intrinsic and extrinsic factors, some wines come to have more mystique than others and the Syrah from Swartland property Porseleinberg is one of...

There can be little quibble that the Syrah from Swartland property Porseleinberg is emerging as on South Africa’s finest examples. Part of winemaker Callie Louw’s ongoing quest for greatness seems...