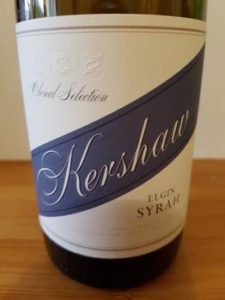 There’s a song by American rock band Queens of the Stone Age called “Feel Good Hit of the Summer” and the same might equally apply to the Elgin Syrah 2013 from Richard Kershaw Wines.

From five different parcels featuring three different clones, fermentation occurred spontaneously and maturation lasted 17 months in a combination of 228- and 500-litre barrels, 55% new. The nose is on song with red and black fruit, some black olive, plenty of pepper and a little scrub. The palate, meanwhile, has good depth of flavour, moderate acidity and soft-ish tannins.

It’s rated 5 Stars in the current edition of Platter’s equivalent to at least 95 on the 100-point scale but I think it’s a tiny bit short of gravitas to warrant quite such a high score. Wine Cellar price: R370 a bottle.

As published in the September 2019 issue of Decanter: It’s early morning on a clear but chilly day in May and the air above Elgin is filled with all sorts...