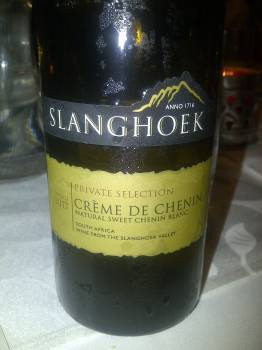 The Breedekloof Food and Wine Pairing Gala Dinner is an annual event which sees producers from the district come to Cape Town to show off their wares and while I thought the line-up last year was patchy at best, the wines last night were much more convincing.

I’m guessing Merwida Sauvignon Blanc 2013 (silver at Veritas, 4 Stars in Platter’s, R42 a bottle) is must enriched but if you’re going to use that technique, this is how to do it – just a bit of pyrazine bite to go with plenty of tropical fruit (score: 86/100).

The reputation of Opstal Carl Everson Chenin Blanc 2012 precedes it (93 points on this blog, 5 Stars in Platter’s, R120 a bottle) while Deetlefs Familie Red Blend 2011 (R320 a bottle) again demonstrated that this cellar is capable of real sophistication. A blend of 29% Cabernet Sauvignon, 29% Merlot, 29% Pinotage and 13% Malbec, it was medium bodied with red and black cherries, carefully judged oak and good freshness (score: 87/100).

Wine of the night however was the Slanghoek Private Collection Crème de Chenin 2013. To give you a sense of scale, this cellar processes some 37 000 tons of grapes a year, equivalent to 30 million litres of wine, of which 3% ends up under its own label. The Crème de Chenin, a natural sweet including 8% Hanepoot in the blend and selling for R35 a bottle, amounts to all of 2 500 litres. I thought the 2013 was really impressive with startling fruit purity and zippy acidity – some fynbos on the nose, peach through granadilla on the palate, it should only gain in complexity over the next two to five years (score: 89/100).

Opstal Carl Everson 2018 Price: R200 From 36-year-old vines. Spontaneous fermentation in barrel only finished after two months before the wine was matured for a further eight months. A 5%...

Attie Louw of Opstal in Breedekloof has made a name for himself in recent times with his more premium wines in the Carl Everson range as well as The Barber...