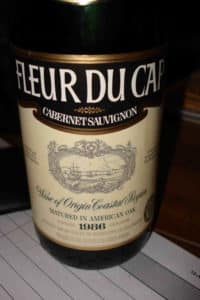 An interesting exercise to mark the re-opening of Die Bergkelder, home of Fleur du Cap wines on the outskirts of Stellenbosch, after refurbishment to offer a better visitor experience:

Barrels used came from the French regions of Nevers and Allier (both tight-grain) as well as Limousin (wide-grain) and then Spain and America. The sixth wine in the line-up incorporated a blend of the first five. In each case, the wine spent 24 months maturing in wood that was entirely new.

The blend (predominatly Nevers and American) proved the most harmonioius of the six samples, but I think I preferred the wine from straight Nevers barrels on the basis that it was more arresting with fruit that was still remarkably fresh, the tannins still grippy. The wine from American barrels came across as sweet and broad and while American oak occasionally works well on Pinotage and Shiraz, I’m not sure it lends itself to austere Cabernet Sauvignon.

Fleur du Cap is not constrained by farm, vineyard or climate – the winemaking team has the freedom to choose the finest grapes from the best vineyards in the Cape...

South African Cabernet Sauvignon urgently needs some custodianship. Many think of it as a mainstay of the industry with wines like GS 1966 and 1968, Nederburg 1974 and Rustenberg 1982...

The maiden vintage Fleur du Cap Unfiltered Chenin Blanc 2014 sat at a stylistic extreme in terms of how imposing it was (see here) and the 2015 is again a...