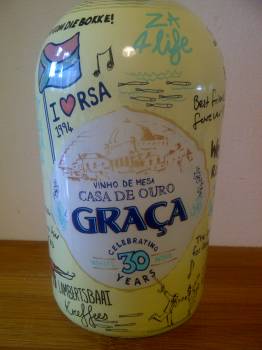 Let’s get the party started.

Graça, loosely based on Portuguese vinho verde, was launched in 1983 by what was then Stellenbosch Farmers’ Winery and became one of the company’s biggest successes of the decade – the wine breaking the million-litre mark in August 1988 and went on to pass 1.5 million litres in March 1989.

To mark the brand’s 30th anniversary last year, the wine was released bearing a limited-edition sleeve. It remains a fun and unpretentious offering – from Sauvignon Blanc, Chenin Blanc and Colombar, low in alcohol (11.5%), technically off-dry (but appears fruity rather than overtly sweet) and with a nice freshness about it. From R30 a bottle.