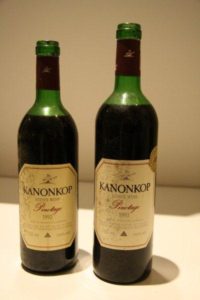 Let Operation Pinotage begin. I’m writing an article for Decanter on the current state of the variety, a gig that was precipitated in part by the Steytler Pinotage 2006 from Kaapzicht winning  the international trophy for best single varietal red above £10 at the World Wine Awards as run by the UK magazine last year.

One of the sub-topics I’ll be exploring is the age-worthiness of the varietal and so two older vintages of Kanonkop pulled at random from my late dad’s cellar, specifically 1992 and 1993. Both wines proved excellent drinking, with  great fruit concentration and not at all excessively evolved even if both had exceeded the famous back-label timeline for recommended drinking.

With Pinotage being a cross between Pinot Noir and Cinsaut (Hermitage), much is made of which of its two parents it bears most resemblance to. Drinking these two wines, it struck me that posing this question was not that helpful as it is very much its own variety, having neither the ephemeral nature of Pinot Noir nor the easy accessibility of (good) Cinsaut.  Rather, to quote John Platter writing in the 1995 edition of what was then his guide, Kanonkop Pinotage is “strong, deep, fruity, robust and bold”.

The Kanonkop vines that supplied fruit for the 1992 and 1993 vintages were already around 30 years old and hence the intensity of fruit. Of the two wines, the 1992 was perhaps the more medium bodied and open structured, the 1993 more full bodied with firmer tannin structure. In Platter’s 1996, the author notes that the wines would have had “part new barrel ageing for [a] year (up to 50% new oak in vintages from ’93, previously about 20%)”. The currently-available 2008 spent 15 months in French oak, 80% new.