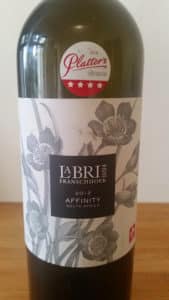 Of the current release reds, the Affinity 2012 (which features a flower called the Wine Cup (Geissorhiza radians) on the label and sells for R110 a bottle), appeals on account of its elegance.

A blend of 52% Merlot, 33% Cabernet Sauvignon, 9% Cabernet Franc and 6% Petit Verdot, it was matured for 20 months in French oak, 51% new. On the nose, red and black fruit, some attractive oak character, the vaguest hint of fresh herbs and mint which entirely suit the wine. The palate meanwhile is medium bodied with fresh acidity and fine tannins. As pretty as the label.

Results of the fifth annual Wine Label Design Awards proudly sponsored by self-adhesive label supplier Rotolabel, with Synchron and UPM Raflatac in a secondary capacity, were announced earlier this evening...