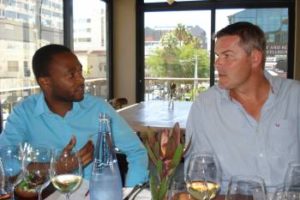 South African born, Switzerland based stockbroker Adrian Vanderspuy acquired Banhoek property Oldenburg in 2003 with the intention of making a Cabernet Sauvingon at least as good as, if not better than nearby Thelema. Simon Thompson, previously of Muratie and Tokara was installed as both viticulturist and winemaker and a programme to convert the farm from fruit to vine was undertaken between 2004 and 2007. Total plantings currently stand at 30ha, 60% red and 40% white.

The first wines are now on the market consisting of a Cabernet Franc, Cabernet Sauvignon and Syrah (all from the 2008 vintage) as well as a Chardonnay and a Chenin Blanc (both 2010).

Thompson is on course to meet his boss’s brief of making a top-end Cabernet Sauvingon, the 2008 having rated 4 Stars in both Platter’s 2011 and the April issue of Wine magazine. The wine shows good fruit density and smooth tannins; 15 months in French oak, 50% new.

The other stand-out wine for me was the Chenin Blanc which showed vivid fruit, a good line of acidity and carefully judged oak (seven months in 300-litre French oak, 50% new). The fruit comes from vines planted in 2006, and I think it’s commendably bold that Oldenburg wants to include young-vine Chenin in its portfolio rather than yet another version of Sauvignon Blanc. “Chenin from 40-year old vineyards bearing two tons a hectare is not necessarily everyone’s cup of tea,” notes Thompson.

Prices are ambitious for maiden-release wines: the Chenin comes in at R110 a bottle from the farm, the Chardonnay at R130, the Syrah at R152, the Cab at R168 and the Cab Franc at R180. If you want to compete with the big boys, no point selling yourself short, though.

I matriculated in 1988 when military conscription for white males was still compulsory, deployment for many at that time involving being sent to the townships to put down unrest by...

Schultz Family Wines is the own label of Rudi Schultz, winemaker at Thelema in Stellenbosch, the current releases bearing labels depicting favourite surf spots, these winning gold at the recent...

What to make of the divergence in ratings between the two vintages? When Thelema announced that winemaker Rudi Schultz would be presenting a tutored tasting of a selection of vintages...