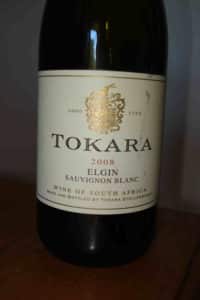 I’ve gone on record that I don’t like Elgin Sauvignon Blanc but perhaps I should re-phrase that and simply say that I find it bemusing. A while ago, I criticised the Oak Valley 2009 on this blog as “slight and not particularly complex” (see here) but I’ve subsequently learnt that when I tasted it blind during the 5-Star tasting for Platter’s 2011, I was convinced it was worthy of the guide’s ultimate rating! That it did not get a majority vote from the panel tasked with endorsing its nomination shows that I’m not the only one who struggles with this particular wine.

Last night, we drank the Elgin Sauvignon Blanc 2008 as made by Miles Mossop of Tokara, this wine having rated 5 Stars in Platter’s 2010 and 4 Stars in the November issue of Wine magazine (although placing outside the Top 10 of that year).

The wine appeared lean and austere in the best possible sense. Cut-grass, lime and green melon on both nose and palate with a great line of acidity. Not exactly ready with its favours but all the more rewarding for that.

Including a 13% portion fermented and matured for five months in old, larger format barrels, the Sauvignon Blanc from Tokara's Elgin is very well realised. The nose shows notes of...

The maiden 2011 vintage of the MCC Blanc de Blanc from Tokara was a fine offering but the 2012 seems altogether richer and perhaps a bit listless. From Elgin Chardonnay,...