Thorne and Daughters was started by John Seccombe and wife Tasha at the end of 2012. After growing up in Johannesburg, Seccombe originally started out studying maths and computer science at the University of Stellenbosch but later switched to winemaking – he has a viticulture and oenology degree from Plumpton College, Sussex and has worked harvests around the world.

His intention going forward is to work with “intriguing” parcels of grapes from around the country, his maiden release 2013 wines made at Hemelrand, also home of the acclaimed Alheit Vineyards wines. 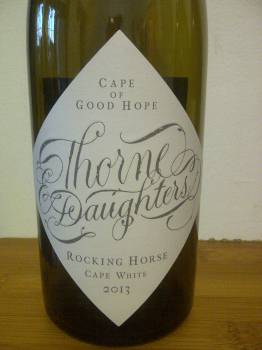 White and yellow peach, honey, an attractive touch of vanilla, some wet clay. The wine appears sweet but is technically dry (RS 1.8g/l) giving it a wonderfully sun-kissed quality. In terms of shape and form, it starts broad but comes impressively to a point while there’s weight without it being oily or buttery. A very sure-footed debut.

Thorne & Daughters Tin Soldier 2013
Price: R215
From a 30-year-old Franschhoek vineyard where white and red Semillon occur equally, red Semillon (or Semillon Gris) a natural mutation of white and no significant plantings found outside South Africa. Fermented and left on the skins for four weeks.

A quite extraordinary nose which can only be described as a combination of Fanta Grape and bay leaf – enticing even if it doesn’t sound like it! Juicy on entry but almost astringent on the finish thanks to the skin contact – not at all unpleasant but it does send the wine in a slightly rustic direction. Will bring tears to the eyes of most wine geeks.

What an accomplishment Rocking Horse 2021 from John Seccombe is. He refers to it as his “cornerstone” wine and at 16 000 bottles, volumes aren’t insignificant. It nevertheless manages to...