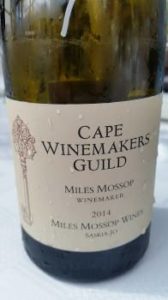 Before anybody entirely despairs of making money from wine, let us recall that record sales were achieved at last year’s Nedbank Cape Winemakers Guild Auction, these amounting to R13 833 200 for 2 428 cases, average price per case being R5 697 (average price per bottle: R950), an increase of almost 24% year on year. With 10 more wines and 534 additional cases on offer this year, that record is surely set to be broken once again.

Credit where credit’s due, the Guild has managed its brand just about to perfection and it’s not just about cashing in as its development trust and protégé programme testify.

Ulitmately, however, the Guild’s reason for existence is as a means to exchange knowledge among quality-minded producers and thereby elevate the standards of South African winemaking. Consequently, the annual auction line-up is an important gauge of what’s happening at the top end of the industry.

So what to make of the 61 wines available for sale this year? After attending a recent blind tasting put on for members of the media, I’m glad to report over-all quality is high – I rated 51 of the wines 90+ on the 100-point quality scale with two wines getting an outstanding 95, these being Johan Joubert Wines Granite Selection Chenin Blanc 2016 and Adi Badenhorst and Duncan Savage Love Boat Red 2016 (full ratings here).

Quality is not the issue and nor should it be given the caliber of the Guild’s members. A slightly different point of debate, however, is the excitement factor of the line-up. As ever, there is a divide between more experimental wines and what a Guild media release terms “well-established wines of great lineage”. Experimental: Johan Malan’s Simonsig Die Kluisenaar Roussanne Marsanne 2016. Well-established: Chardonnays from Gary Jordan of Jordan Estate and Andries Burger of Paul Cluver Estate. Experimental:  The Drift Farm Comfort Zone “Whole Bunch Tinta” 2016 (from 83% Tinta Baroccs, 8.5% Barbera and 8.5% Monastrell). Well-established: Etienne le Riche Cabernet Sauvignon Reserve 2014 and Kanonkop CWG Paul Sauer 2014.

If I was buying at the auction, I’d like to have the sense I wasn’t paying a rather large premium for a barrel selection of a standard production wine but then I’m not the target market. Tsogo Sun has been the biggest buyer for the last three years and any wine which is too alternative is probably not what guests occupying a suite at the Sandton Sun are looking for.

The other point that needs to be made regarding the Guild is the issue of membership which currently stands at 49. There’s a tension between limiting numbers to keep the Guild if not exclusive then at least manageable versus the need to bring in new talent lest the grouping become irrelevant. There are a number of current members who fulfil what might be termed “executive” rather than “hands-on” roles within their own organisations and perhaps it’s time for the Guild to increase the number of honorary members thereby making way for more “young guns” to showcase their wines.

The 35th Nedbank CWG Auction is open to the public and will be held at the Spier Conference Centre outside Stellenbosch on Saturday, 5 October 2019 (buyer registration closes on...