David Donde: A potted history of coffee retail in SA 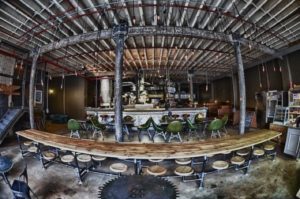 In the beginning, coffee retail was based on the concept of the Viennese coffee house. And all was good. If you wanted a cream torte and some bitter stuff to keep you awake to make it through to drinking hour.

A second wave of coffee consumption to sweep through popular culture came with the Espresso machine. For a while, Italians were the only ones in the know but the world was ripe for Starbucks to present coffee to the impressionable masses, well those with spare $10 notes kicking about.  Of course, for this, you could expect an not entirely authentic pumpkin spice latte, served in a bucket as any good American franchise does.

South Africa kind of missed this chain of events. We went from hotel brew sitting on the heating element and gradually becoming ever more burnt straight through to the rise of Vida e caffè, the original branch in Cape Town’s Kloof Street, the epicentre of cool kids at the time. You might have thought we were ripe to become an outpost of the Starkbucks empire but it hasn’t happened.

What did happen was that artisan roasteries were starting to sprout up. That began in 2006. And lo, you could get a great cup. At a fair price. A perfect, artisan-roasted flat white for R12 to R15 and coffee lovers had it good.

Then the Soccer World Cup rolled around in 2010 and suddenly you could get your coffee from one of six pop-up Starbucks startups. Would you like Maple-flavoured syrup and whipped pseudo-cream with that ma’am? Locals, however, by now had quite educated palates and while for an outsider looking in, a Starbuck franchise in every neighbourhood might have seemed inevitable, this didn’t happen!

Funny that. South Africa was too populated by South African chains who’d worked hard to build their brands and get into the heads off consumers, while the foodies were being served by the artisanal operators.

While Starbucks had built the coffee market in the US of A, it seems to me that it arrived a little too late on the local scene, and never achieved sufficient market penetration.

Today I’m glad to report we have a burgeoning speciality market with literally hundreds of micro-roasters, each with their own coffee ethos, providing a many different but equally valid drinking experiences. See we do know better over here.  Sometimes.

David Donde: Advice on starting your own coffee shop

Another week, another new coffee roastery opens up in the Mother City. Like some sinister underground movement, the number swells. Welcome to the dark side of coffee. Unfortunately the group...

Quality sadly is too often reduced to a label printed on the front of a tin of the cheapest of instant coffees. That clearly isn’t right, is it? So what...

David Donde: How to make great-tasting coffee at home

I am often asked how to make great coffee at home. Well, actually, I am usually asked “Which (overpriced) espresso machine should I buy?”. Presumably one’s life is better and...