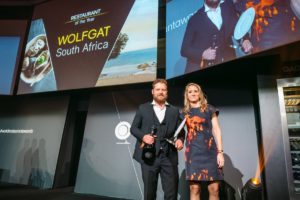 Wolfgat in Paternoster on the West Coast was judged “Restaurant of the Year” as well as “Off-Map Destination” in the inaugural World Restaurant Awards, the announcement took place in Paris yesterday.

The World Restaurant Awards have been created by leading entertainment industry company IMG, the idea behind the initiative being to “celebrate restaurants as culture, considered in the same way as film, art and music. That means relevant/progressive categories judged with robust integrity by an expert panel in an attempt to better reflect the true range and diversity of the international restaurant scene”.

The World’s 50 Best Restaurant Awards 2021 have been announced in Antwerp, Belguim with Wolfgat in Paternoster, placing 50th. Noma in Copenhagen, Denmark placed first. Earlier in the year, FYN...

Daisy Jones: Wolfgat is the world’s best restaurant: Why does it matter?

Earlier this week, Kobus van der Merwe’s small Paternoster restaurant, Wolfgat, was named Restaurant of the Year according to the inaugural World Restaurant Awards (see here). Naturally, this provided us...