The dictionary defines finesse as ‘refinement and delicacy of performance, execution or artisanship’. And so, it is with the Wasted! Menu at the Chef’s Table of the Mount Nelson Hotel.

Those wanting old school posh nosh can still do that in the hotel’s main dining room but this 5-course meal is served behind the swing doors, amidst the chefs in a kitchen alcove. Tables are set bistro-style and a single server, Tinashe Chirkure, brings both wine and food.

The setting matches the menu which executive chef Rudi Liebenberg has designed to make use of ingredient offcuts that might otherwise be discarded. In this context cauliflower stalks become atchar and ginger trimmings infuse into cordials.

All over South Africa chefs are beginning to engage with issues of food waste. What makes this exercise special is the extent to which it has pushed the epicurean imaginations of Liebenberg and his team. A profound and intimate reverence for ingredients is revealed. Each plate reads like a personal prayer. Respect is made manifest not just in the use of parts of plants and animals that might otherwise have been rejected but also in the attention to detail paid to flavour pairings. Dishes are designed to bring out the essential integrity of the products and their relationship to each other. As the meal flows, courses are distinct but discretely compatible. Everything is memorably delicious but there is never a moment when one dish diminishes or intrudes on another. 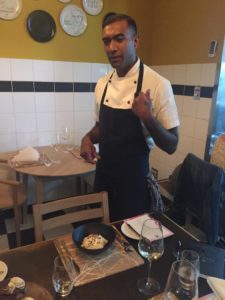 Chef Liebenberg has a talent for training. He recognises and asks that guests acknowledge the skilled young chefs involved in making the meal. Baker Togara Mabharani brings sour dough made magnificent by the addition of smoked marrow bone butter. Sous chef Dion Vengatass serves an umami-laden melange of heirloom tomato trimmings enrobed in a smoked tomato cream.  It is the very essence of simple summer pleasures raised up to the luxurious.

Wine pairings are optional and I opted in. My sea trout tartare (created from the otherwise unused collar of the fish) went wonderfully with a Tierhoek Chenin. The lush generosity of a Beaumont Noble Late Harvest was charmingly compatible with an exquisite apple jelly and panna cotta plate. The wine’s orange blossom adorned, honeyed charms underlined the zesty tones of the accompanying marmalade ice cream. Chef Nkomo made the marmalade for the afore mentioned frozen dessert with the orange shells left over after hotel breakfast juice squeezing.

Skilled, understated, exquisite and eco-epicurean. Finesse is everywhere apparent. At a cost of R395 per person for five-courses with cordials and kombuchas but without wines and R575 with wines, the prices are at the more reasonable end of what one can expect to pay for such stylish fare. Especially since this is the best meal in Cape Town.