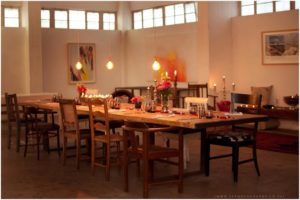 I’ve never thought much of long-table restaurants. Nor am I a fan of drinking wine out of tumblers. Innovative, hipster, trendy… whatever you want to call either fad, I prefer the privacy of a table for two, the absence of small talk and the elegance of long-stemmed glassware. Then I heard of [spasie].

I was skeptical of the “first underground restaurant in Cape Town”. The Mother City’s food scene is already saturated with everything you’d find in global food capitals, and then some. But just when I thought she couldn’t surprise me…

Cape Town foodies will recognise [spasie]’s collaborators as the folks behind SecretEATs and Haas Coffee. As you get to the dodgy end of Church Street, music can be heard and guides you towards the steel rollup door of an old warehouse and a pre-dinner drinks space featuring tea-light candles and wooden benches. Outside, blanket-clad bergies push trolleys past the metal gates, making you feel guilty at having just EFTed R650 a head. At the other end of the room, pans clang in an open kitchen.

There’s a guest chef every week, and he or she makes the rules. Your experience is very much dependent on who’s in the kitchen (and who’s sitting next to you at the table), but the format of every evening remains more or less the same. Guests are ushered couple-by-couple into a closed dining room, the night’s chef gives a quick introduction to the menu, the winemaker an intro to the wines, and then five courses with wine pairings are presented. It’s exclusive, high-end, and oh-so chic.

At present, [spasie] is open on Thursday and Friday nights, but host JP told me that plans for Wednesday nights were soon to be unveiled – something to do with BYOB and live entertainment, and significantly more affordable than the five-course pairing. And, from December they’ll be open for Sunday brunch. Upcoming chefs include Bertus Basson, Sue-Anne Allen of MasterChef fame, Craig Cormack and Brad Ball.

Why eat at [spasie] when you could eat Bertus’s dishes at Overture or experience Brad’s new venture at Peddlars? Someone described it by saying that going to a regular restaurant is like attending a rock concert where you’re played all the big commercial hits. Eating at [spasie] is the unplugged version; intimate and allowing more expression.

In terms of the food, our night (with Clara Bubenzer of Beautifull Food in the kitchen) was a mixed bag: an extraordinary Asian twisted green starter salad, zesty salmon gravad lax, slightly overdone seared beef, outstanding Seoul-style pork belly, and a beautifully presented but slightly stodgy raspberry panna cotta. The wine pairings from Good Hope were more hit than miss. The company was entertaining: a hairdresser, a housewife, an investment strategist, a businessman, a journalist, all fiercely interested in food, and rather delightful company – no small talk needed.

I may have come round to long-table dining. But I still don’t like wine tumblers.

Copy editors will appreciate the difficulty: [spasie’s] or is that [spasie]’s or just spasie’s?  Either way, [spasie] is situated at. 97 Church Street, Cape Town. A five-course meal, paired with wines, costs R650 per person. Tel 021 424 3317 or go to @spasieCT or mail speaktospasie@spasieunderground.com.