I spent an inordinate portion of my youth messing about on mountains. We worked out by trial and error what foods were the lightest yet palatable (some barely), and the all-important question of what booze to lug into the hills. It was always a matter of quantity over quality. But even more important was how, or more exactly, in what, to carry it.

Some folks settled for beer in cans as the simplest method of elevated inebriation. One comrade in climbing went as far as making his own backpack, using two quart beer crates as the dummy: one for a crate of quarts and the other space for his camping and climbing equipment. As an afterthought he added two enormous side pockets for sandwiches.

In truth the making of wine has never been the hardest part of the process of getting our favourite tipple to us in palatable form. The Mesopotamians came up with the idea of storing their wine in clay amphoras, or amphorae if you want to show off. You probably say Vincent van Go. The Egyptians, before Allah told them to stop it, started the custom of stamping the name of the vineyard, the vintage of the wine and even the type of wine into the wet clay. They were the first shopkeepers, and following the wine thing turned to carpets and papyrus knock-offs.

The Romans developed the craft of glass blowing, with crude, onion-shaped casks replacing clay as the best way to store and transport wine. Being hand-crafted in small shops, the bottles varied greatly in size. It was only in the 1700s that molded, standard-size bottles came into play, but even then sizes varied substantially from place to place.

Regions tended to decide on their own sizes, so that until not so long ago Bordeaux came in 800 ml bottles, while Beaujolais came in a 500 ml glass pot right up to the middle of the 20th C. Some Beaujolaises are still called Le Pot, as are many brassieres of the region. Burgundy also favoured the 800 ml bottle.

Partly because the Americans said so, but really because their “fifth” was almost exactly 750 ml, that measure kind of enforced the size rule.

For storage and transportation wooden barrels definitely upped the game and the quality of the contents but proved impractical for carrying quaffable quantities into mountains, whether by donkey or shank’s pony. The Spanish and Italians came up with the idea of plaiting little straw bags around their bottles to limit breakage. While that did not catch on here I do recall some super-cool mountaineers sipping from wine skins slung over their shoulders between finger-jam movements. 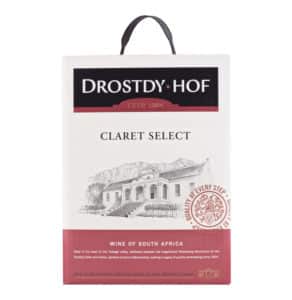 Many of us settled for OBs in plastic cold drink-bottles, because the sweet fortified wine gave you more barf for your buck. But as time marched on and our tastes refined, there clearly developed a gap in the market. Those whose parents funded their educations carried their imbibing and cooking fuels in expensive aluminium bottles. For the rest of us, one of the great inventions of the times came to our aid some time before despair and sobriety set in, that being the humble bag-in-box..

The further beauty of the box was that, with space and weight at absolute premiums in our burgeoning packs (some climbers would cut off the half the handles of their toothbrushes to save some), boxes packed so well and weighed no more than clunky alloy bottles.

It seemed to us boxed wine was an invention at least up there with fire, soya mince and oral contraception (the young women of the mountain club certainly seemed to thrive on the fresh country air and bracing mountain streams and he who carried the most wine had a clear advantage).

Neither Professor Google nor I are sure on this, but as I recall it was maybe Drostdy-Hof or Robertson that first boxed wine in South Africa (although Cellar Cask also comes to mind). Whatever, the first hiking friendly ones I remember buying were 500 ml boxes of Drostdy-Hof . I could pack two each of their Dry Red into each of the side pockets of my backpack and so carried the equivalent of nearly three bottles for a weekend in the bergs.

Life improved immeasurably when we started to find wine that was actually passable in boxes. Just around the time we departed the sheltered corridors of academia to enter the millruns of gainful employment, I recall foregoing my long serving and equally long suffering Drostdy-Hof Dry Red for the newly launched Robertson Merlot. All this and so close to heaven too.

On WineEnthusiast.com last year, I think Mike Dawson was unfair in his assessment of the box wine innovation: “Back in the 1980s and ’90s, the average boxed wine was one-dimensional headache water geared toward buzz-seekers, not wine lovers.”

There was even, if you can believe it, an annual South African box wine award. In 2011 my taste in these things was vindicated when my long-time favourite and constant hiking companion, Drosty Hof Merlot en doos was awarded best red. In 2012 (seemingly the last time the awards were doled out) the champion red was Robertson Winery Shiraz.

While not likely to ever sport a Decanter World Wine Awards gold decal, while sitting on a high and lonely mountainside with the Milky Way arching overhead and an enamel mug full of deboxed dark holy libation, it’s as close to paradise that you’ll get on this earthly realm.

This is the time when snow lies scattered across the high ground of South Africa – like clothes strewn across the floor of a teenager’s bedroom. While not exactly the...