The inaugural Cap Classique Report sponsored by multinational financial services company Prescient is now out. There were 50 entries received from 27 producers and these were tasted blind (labels out of sight) by a three-person panel, scoring done according to the 100-point quality scale.

Congratulations to Simonsberg-Paarl property Babylonstoren on having two vintages of its Sprankel in the Top 10, while Kleine Zalze cellar also has two wines, these both W.O. “Western Cape” as is the Sunrise Brut NV from Delaire Graff. Of the others, three are from Stellenbosch and one each from Cape South Coast and Walker Bay. Of the 50 wines entered in total, 23 fell under the rather broad designation of Western Cape, an indication that Cap Classique is as much about technique as terroir.

What does top bubbly go for these days? 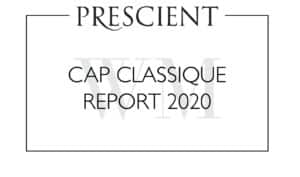 To read the report in full, including key findings, tasting notes for the top wines and scores on the 100-point quality scale for all wines entered, download the following: Prescient Cap Classique Report 2020