Book review: My Kind of Wine by John Platter 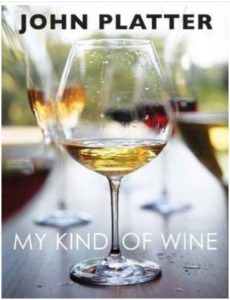 My Kind of Wine by John Platter.

John Platter founded what is today Platter’s South African Wine Guide in 1979 and ran it until 1997. He’s back with a new wine book called My Kind of Wine (price: R375). Hard-cover and 224 pages in length, it’s substantial even if not all-inclusive. “This is not a systematic – much less comprehensive – tour of the wine lands. It’s a ramble,” Platter writes in his foreword.

The majority of the book sees Platter exploring his recent favourites category by category, providing some basic education for the novice, vignettes of the individual producers and tasting notes, sometimes with reference to a specific vintage of a wine and sometimes not. It’s dense, both in content and lay-out, and most readers will probably dip into it sporadically rather than reading from beginning to end.

Next comes some musings on recent phenomena in the industry: the rise of the new wave; the role of viticulturist Rosa Kruger on the one hand and that of über-critic Robert Parker on the other. And after that, some brief personal thoughts on a variety of major and minor industry issues, everything from blind vs sighted tastings and cork vs screwcap to whether or not it’s acceptable to add ice to your wine. It’s always eloquent if occasionally eccentric.

As Platter says upfront, he’s not trying to make a methodical argument one way or the other; rather he is hoping that you become infected with the same enthusiasm he has for his subject.

Finally, there’s a recipe section entitled “Wine Country Food” featuring recipes “as they were given to us” by winelands personalities, which feels a bit of an after-thought and should have perhaps been fleshed out into another book altogether.

It’s difficult to know what to make of My Kind of Wine as it’s not quite definitive reference work and it’s not quite lavish coffee-table book. It does, however, bear the name of arguably South Africa’s greatest modern wine commentator which hopefully will mean even those only incidentally interested in wine will be inclined to engage with it and be inspired to drink something less ordinary going forwards.

John Platter My Kind of Wine

This last weekend saw perhaps the best Swartland Revolution yet – but I suppose that’s excitedly claimed each year by at least a few attendees. For those who haven’t been...