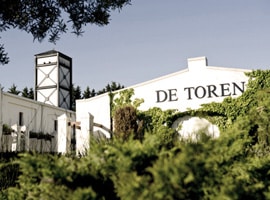 De Toren Private Cellar in Stellenbosch has a new ownership structure with founder Emil den Dulk stepping aside to be replaced by Cedric Nicolas Schweri, Daniel Robert Mueller and Cape Estate AG while Albie Koch retains his shareholding in De Toren and remains as its Managing Partner – the deal was signed in March this year.

Schweri is a Swiss-born entrepreneur. Amongst other investments he currently owns and operates restaurants and hotels across South America and Europe. He is also a polo player, and enjoys the sport when staying at his South African residence at Val de Vie outside Franschhoek.

Mueller, an investment banker for the past 25 years, and has worked in New York, London and Zurich. He is also of Swiss descent, but has travelled back and forth to South Africa for over 20 years. In August 2018, Mueller and his fiancé decided on a part-time relocation to South Africa, something which will enable him to be actively involved in the management of De Toren.

Koch has been with De Toren from day one, first as the estate’s very first winemaker and later taking over the day-to-day responsibilities of running the business. He retains his shareholding in De Toren and remains as managing partner overseeing all of the estate’s activities.

Finally, Cape Estate AG, a Swiss company with various interests in South Africa, completes the new shareholder base. De Toren South Africa will be operated by a newly formed Swiss company called De Toren Holding AG. Schweri will be Acting Chairman of this holding entity, while Mueller will operate as its CEO.